Population increases of 900K - 1 million per decade is not acceptable 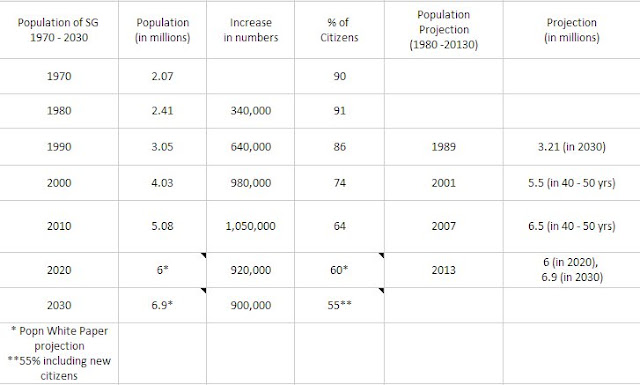 In 1989, the Government projected that in 2030, the population would be 3.21 million, but by 2000 the population of Singapore stood at 4.03 million, and citizens comprised 74% of the population. The population planning parameters had been exceeded by over 800,000 people, 30 years prior to the projection year.

Then, in 2007, the PAP Government upped the population projection and projected a population of 6.5 million in 40 - 50 years (6.5 million population between 2047 - 2057). And recently with the release of the white paper on population, this projection has been further upped and the time frame for population increase has been moved rapidly forward.

To increase the population size every decade by 900,000 to 1 million people mainly through immigration, and the correspondingly decreasing percentage of citizen population is unacceptable. Precedence suggests that population increase and inflow of immigrants and foreign workers grossly exceeds such projections. Such increases could mean that Singapore will have a population of over 8.5 million population in the year 2050.

Halfway through the Parliamentary debate, a PAP member perhaps sensing the outrage of the general population suggested that the original motion be amended. Today the PAP Government paased the amended motion which reads:


“That this House endorses Paper Cmd. 1 of 2013 on "A Sustainable Population for a Dynamic Singapore" as the roadmap to address Singapore's demographic challenge, and Paper Misc. 1 of 2013 on "A High Quality Living Environment for all Singaporeans" as the land use plan to support Singapore's future population projections; and supports maintaining a strong Singaporean core by encouraging more Singaporeans to get married and have children, supplemented by a calibrated pace of immigration to prevent the citizen population from shrinking; and recognises that the population projections beyond 2020 are for the purpose of land use and infrastructure planning, and not a population target; and calls on the Government to:

(a) place priority on resolving current strains on the infrastructure, particularly in transport;

(b) plan, invest in, and implement infrastructure development ahead of demand;

(c) ensure that the benefits of our population policies, such as better job opportunities and salaries, flow to Singaporeans; and

(d) carry out medium term reviews of our population policies and assumptions to take into account the changing needs of Singapore and Singaporeans, as well as changing domestic and external circumstances.”

The PAP Government now positions the white paper not as a policy, but as projection to plan for 'worst case scenario'. The Prime Minister in addressing Parliament today, said that this will be a shift in the Government's position, for now, they will build ahead of demand.

To me, the amended motion which was passed today, does not make sense. Why would you plan for 6.9 million population and build more flats, rail network, etc, but not bring in the people planned for that infrastructure increase? The price of current flats will depreciate quickly if there's a glut of unoccupied apartments. The transport operators would not want to run a loss making business...

We don't have a stupid Government. They know that they can't build and expand rapidly in 17 short years, but leave it empty. That will be disastrous!

Which means that the PAP Govt's talks about 6.9 million (well, while we are at it, let's be honest and call it 7 million) people in 2030, being planning parameters is disingenuous. It is a projection that will have to be executed. I wish the People's Action Party will be honest to the citizens of Singapore on this.

While the Parliament has passed this Paper, and we are headed towards an uncertain future, the calls for National Referendum on the future population of Singapore is growing louder (see THIS, THIS, THIS and THIS). Because the majority vote in Parliament today, to pass the motion to rapidly increase the population of Singapore to almost 7 million people may not be reflective of what the citizens of Singapore want for their own country, I too support the call for a National Referendum.