"Mr Ho Kwon Ping, said not too long ago that Singapore needed another wage revolution to complete the 1979-81 successful wage revolution. He added that the first wage revolution had been most successful only in the manufacturing sector, but not in the other sectors, such as in the construction industry, the retail trade sector and the household sector. We all are aware now that we have 1.157 million non-resident workers, not like in 1979. However, I must hasten to add that I am thankful that these foreign workers have chosen Singapore to work, instead of other countries, and that it is not their fault or shortcoming that our employers, out of sheer necessity, have chosen to employ them to work here in Singapore." 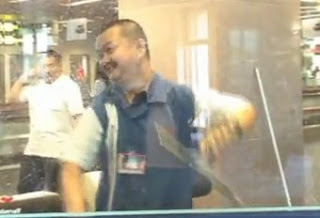 Although Members of Parliament like Irene Ng has agreed with Prof Lim's point that "a radical shake-up is needed to lift the wages at the bottom," other cabinet Ministers like NTUC chief Lim Swee Say have branded Prof Lim's opinion as being "too risky"[2], preferring wages to rise in tandem with productivity increases.

I am glad that Prof Lim got this debate on wage reforms going, but I am unable to agree with him entirely - as well as with Mr Lim Swee Say. I think both Prof Lim and Mr Lim may be divorced from realities on the ground, and so both views must be moderated.

I am not averse to the fact that Prof Lim's proposal (which has now been dubbed 'Shock Therapy'), will make labour, a factor of production, more expensive, but any wage correction policy must be orderly.  The eventual policy that is implemented, must be thought-through properly and has to be designed to force an increase of the productivity of higher value-added operations, to reduce the reliance on cheap, unskilled foreign labour, and to raise labour productivity.

The wage correction policy (which in my opinion must to be implemented soon) while ensuring that there are enough incentives to induce people to work hard and take risks, must also be tweaked to ensure that there is equitable distribution - meaning, the percentage of increment must be lower for the higher income-groups, than for the corresponding lower-income groups.

Any effort towards equitable distribution of wages must also not fail to induce workers to acquire new skills or to dent the achievement orientation inherent in most Singaporeans.

Prof Lim raised an interesting example when he narrated how in the past, most car washes were automated but now are being done by lowly-paid workers. It is here that the government must employ creative destruction, where old technologies and old ways of doing things are scrapped for the new.   Without doing that, it will be almost impossible to increase productivity.

Without a well thought out creative destruction plan,  Finance Minister Tharman Shanmugaratnam's proposal to increase workers' salaries by 30 percent in 10 years will be as impractical as Prof Lim's advocacy for 'shock  therapy', which will see income rising by 50 per cent in three short years, for the lower-income groups.

The  attempt at shaking-up  wages must also try and keep inflation at bay by adopting a demand-pull, cost-push tax strategy.

An appropriate wage policy is a very strategic, integral part of overall growth and so the call to restructure wages  cannot be ignored. My suggestion would be to raise the wages of the lower-income groups by 40 per cent in 5 years, while making sure that the increase for higher-income groups remain relatively modest.

-----
See my response to the question how I arrived at 40 percent over 5 years HERE.