A better proposal than Dy PM Tharman's and Prof Lim's 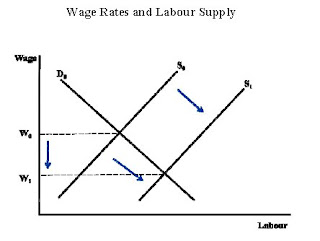 "I wonder why he only proposed to raise the low wage income by 40% when these workers were underpaid by 100%. how did he arrive at that number?" This is a question that I am asked with regards to my opinion that wages for the lower-income groups should be raised by 40 per cent in 5 years.

It's a fair question. But one which begs asking, if these workers were underpaid by more than 100 percent, how then did Deputy Prime Minister Tharman arrive at 30 per cent over the next 10 years? How did Prof Lim arrive at 50 percent increase over 3 years? The fact is, all these figures are arbitrarily arrived at - just like mine.

Mr Tharman's plan will mean that the salary of these workers will rise by 3 percent every year over 10 years, which is too low an increment that is dragged out for too long a period and so unfairly disadvantages the workers. Prof Lim's proposal on the other hand, will mean that employers will have to raise salaries by between 15 and 25 percent over three years, which will place an exceptionally heavy burden on the employers.

My proposal will mean that the salary of the workers will be raised by 8 percent over five years, which is the gist of my proposal, that "any wage correction policy must be orderly". This in my opinion, will be a fair outcome both for the workers, as well as for the employers.

Whatever the pay hike %, the not insignificant pool of the latter 4 categories is not even sussed out accurately, I reckon.

The Pariah said…
Also, I'd tend to agree with Blogger Alex Au's point on this topic.

Viz, there must be significant job or process re-design and re-scope (Alex Au's observations about food court tray return).

Increased pay alone will not and cannot solve a myraid of social and infrastructural ills.

Have you considered the inefficiencies and wastages that arise from electoral boundaries drawn into shapes of crabs and scorpions?

Why? Because URA/BCA as Regulators looked the other way and allow Developers to (i) charge from the inner edge of glass panels (instead of the traditional mid-point of wall thickness on whch window frame sits) and (ii) sell by Net Saleable Area instead of Strata Title Area.

Better still, the PAP Govt gives grants for "increased productivity" to the Construction Industry when all-glass panels hastens "buildability". Never mind about the subsequent water seepage issues, the laundry of theatre drapes in every condo unit RELATIVE to the lower maintenance issues of concrete walls.