Opposition strongmen made of tougher material 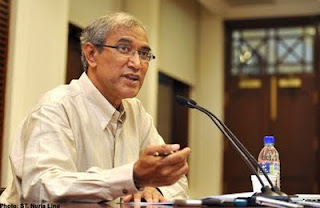 Former senior minister of state Zainul Abidin Rasheed writing in the latest issue of PAP magazine Petir said, "it is likely that many will shy from being possible future sacrificial lambs by standing in Aljunied." (see HERE)

The former-MOS only confirms many people's suspicion that candidates who stand for elections in PAP tickets, are afraid of standing up against tough opposition teams.

Contrast this with Low This Khiang going up against George Yeo and Chiam See Tong going up against Wong Kan Seng. The strongmen of the opposition certainly seem to be made of tougher material, than their counterparts in the ruling party.

Will a high-flying PAP man ever lead the charge in opposition held wards come the next election?
Opinions

The Pariah said…
Doesn't Zainul Abidin's comment once again mirror what we likely already know of the PAP's increasing lack of moral fibre?

PAP also admitted that they were not able to attract the 1st-liner talent and hence were forced to field 2nd- and 3rd-liners in GE 2011.

If one has conviction and commitment, why would one join a political party that exhibits such less-than-sterling qualities?

A political party that:

(c) Disrespects the contributions of even their own party's MPs as Second and Third Readings of Bills in Parliament are typically collapsed into one and ministerial replies can be tangential as rigour in further debate and challenge is not so "kosher";

(d) Has no qualms to skew a whole host of rules to their benefit (eg, providing dinner/transport for rally attendees, HDB Lift Upgrading priority only for PAP voters, CCC Adviser in opposition ward appointed by PA Chairman who is the Sec Gen of the ruling party, etc).

Birds of a feather flock together.

Anti-Aging, Health, Personal Care said…
A lot of these PAP people are 'shoo-in' candidates hiding under some ministers to be elected to parliament under GRC seats. They don't have much experience in facing real challenge. Anyway, why so determine in unseating the oppositions which aren't that many? This country belongs to everyone not just PAP people.

Getting back Aljunied? No problem. said…
Why would the PAP risk someone with ministerial material against someone who can only run an SMC or GRC, which is typical of the WP?

We know that managing agents form the backbone running town councils both in PAP and non-PAP wards. The job of the MP is not so difficult, if you hire the right company and people to do the job.

Aljunied was lost because of PAP's policy of importing cheap foreign labour. If the PAP were to stop the influx of foreigners and lower the cost of housing, you'll see PAP taking back Aljunied.

WP Low took very little risk in coming out of Hougang. The WP just rode of the wave of discontent with PAP policy.

On record, we see and hear very little of WP Low Tiah Kiang or NMP Slyvia Ang. I don’t remember them organizing any event that benefitted Singaporeans. All they did do is to serve the residents of Hougang. I would have voted for the PAP if all I care about is better service for my precinct.
September 9, 2011 at 11:36 PM