May 25, 2020
Singaporeans must be empowered to be Captains of our Own Lives to effectively fight a pandemic 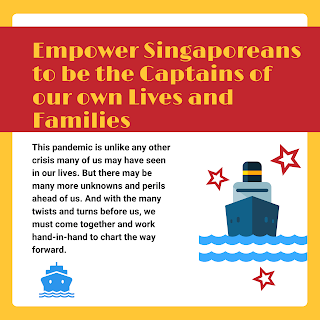 Covid-19 shows Singaporeans why we cannot rely only on one man, or even one band of men and women, especially when they have readily admitted that they have lacked foresight. It’s time to return power back to the people.

The Four Asian Tigers refer to the economies of Singapore, South Korea, Hong Kong and Taiwan. All four countries were affected at about the same time by the coronavirus infection which first started in Wuhan, China, in December 2019. Singapore’s response to Covid-19 started in a similar manner to all four economies, especially Taiwan’s.

On Feb 29, Singapore had 4 new cases, and today we have spiked to 1,016 new cases and have crossed over the 10,000 mark for Covid-19 infections. Taiwan, Hong Kong and South Korea on the other hand, managed to better control the spread of the infection in their own countries and have successfully managed to bring down the number of new cases. On April 21, Taiwan and Hong Kong reported 3 new cases each, while South Korea had 11 new cases. Singapore did many of the same things that Hong Kong, Taiwan or South Korea did. But it didn’t work. Why? The main reason is because the people in the other Asian Tiger countries do not blindly follow, or even wait, for Government instructions. They are the captains of their own lives and families.

For example, the Korean and Chinese people of Hong Kong and Taiwan, had of their own accord began wearing masks and taking other precautions before any official guidance was issued by their governments. The mindset of the people was critical in the Tigers beating back the onslaught of the attack by the vicious infection. Singaporeans on the other hand have been made handicap. This is emphasized by Singapore’s founding Prime Minister, Mr Lee Kuan Yew, himself. Mr Lee said in his memoirs, “My experience of developments in Asia has led me to conclude that we need good men to have good government. However good the system of government, bad leaders will bring harm to their people. […] The single decisive factor that made for Singapore’s development was the ability of its ministers and the high quality of the civil servants who supported them.”

This system of Government however, could be dated and can only work when we have good, capable leaders with foresight. Leaders who will not blame lapses on the lack of hindsight. Besides capable, compassionate leaders with integrity, there is also an urgent need to build an open, transparent, independent and accountable governance system to make Singaporeans future-ready. A former policy officer from the Ministry of Education for example, took to Facebook in 2018 to say why our children are not being properly prepared for the future.

The officer who oversaw the Ministry’s Direct School Admission (DSA) scheme between 2011 and 2012 said that even though teachers acknowledge that “critical thinking” is an essential skill our students need for their future, making this happen is increasingly difficult as dissent is discouraged in our classrooms, and also because MOE wants to “perpetuate certain national narratives as unquestionably true”. Our system breeds students who cannot appreciate that for some complex situations, there simply is no right answer, and that people who disagree with us can still be entirely reasonable and sensible. The policy officer argues that educators here have become desensitised and that there are a lot of depressed and anxious students in Singapore.

Dr Ang Yong Guan noted in 2017 that Singaporeans may have developed a deep sense of learned helplessness. Dr Ang said that learned helplessness will in the long run lead to anxiety and depression. He added, “To avoid these negative consequences, continue to be aware and to understand these national issues without getting emotionally affected. Contain these negative emotions, be mindful of their presence and continue to lead our usual lives.” Singapore, through the years of, has become overly reliant on the Government for guidance and critical thinking. This is one big reason why we are failing in this Covid-19 crisis which has exposed the serious shortcomings in our society.

This pandemic is unlike any other crisis many of us may have seen in our lives. But there may be many more unknowns and perils ahead of us. And with the many twists and turns before us, we must come together and work hand-in-hand to chart the way forward. We cannot rely only on one man, or even one band of men and women. We cannot let these men amass so much power especially when they have readily admitted that they do not have the foresight.

This is why we have to strengthen our key institutions with values such as Openness, Transparency, Independence, Compassion and Accountability. This is why our people must be enabled to be the captains of our very own lives and our families.