An open letter to the incoming SMRT CEO

April 18, 2018
It has been about ten years since I took to public life. In these 10 years, I have been involved in a number of projects/causes which I am very proud of. One among them, is leading the charge for change at SMRT in 2011, after two of the biggest train disruptions affected thousands of Singaporeans.

My main call was for the then-CEO of SMRT, Saw Phaik Hwa, to take responsibility for the fiasco and resign.


"The CEO of SMRT must do the right thing, take responsibility for the failures of SMRT and resign. Her resignation will be highly symbolic and will go a long way in restoring the confidence of the people in the system – not just the MRT system." (My op--ed: The story of SMRT is the story of Singapore) 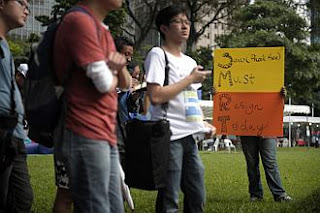 Less than a month after the protest, the CEO resigned. The chairman of SMRT, however, implied that this was not because of the public uproar and that the CEO had discussed the matter with him prior to the protest.

The Transport Minister though recently admitted that the "SMRT Board decided to remove their previous CEO" after the 2011 disruption. (Ministerial statement: 7 October 2017 SMRT Flooding Incident and Related Issues, dated 7 Nov 2017)

It took 6 years for the public to know that Saw was in fact fired!


To me, the secrecy exercised over such matters is one major reason why there is a lot of public distrust in SMRT. SMRT has even been faulted for failing to tell commuters of delays through its train and station announcements and via mainstream and social media, as well. How do you expect the public to trust such a public transport provider?

Now another CEO of SMRT will be stepping down, probably to defuse the criticisms leveled at the public transport company's many disruptions and maintenance lapses. To be fair (and despite the mega failures), Desmond Kuek did do quite a lot to overhaul the structure.

I think the biggest failure of Desmond Kuek was his smugness (which prevented him from really connecting with the public) and his decision to choose public relations over truthful, honest discussions with the commuters.

Army generals are generally known to be sworn to secrecy. That is a virtue when you are tasked with protecting the security of the country - but not when it concerns the operations of a public transport company which millions of people rely on.

SMRT said that after a global search, it has now settled on another General to be its chief officer - Lieutenant-General Neo Kian Hong.

It is time for SMRT to not work in silos and in secrecy, in trying to fix its many pressing problems. It should instead involve every one of its commuters to create solutions.

If the new chief of SMRT is reading this open letter, that is my only piece of advice for him.