"Where were the Farid Khans and the Salleh Maricans? Why didn't they come?... Because they knew that in an open election - all things being equal - a non-Chinese candidate would have no chance."


Having contested an election as a minority candidate, I am disturbed enough by his comments to write this note. Let me explain why.

Even in 2011, the pool of people who could qualify for the Presidential race was small. It has further shrunk now. There is a reason why we are called the minority. Where the pool of people eligible for a contest is so stringent that it would disqualify the majority, it is no surprise that the pool of minorities within the minority will be even smaller.

I believe there were no Salleh Maricans and Farid Khans at the 2011 Presidential Election, not because they were afraid to go up against the Chinese candidates. They were not there because like me, they were at a different stage in their lives and not ready for public life.

I have a simple answer for PM Lee. More Chinese were at the right stage of their lives to come forward as candidates for the 2011 Presidential Election.

Only 1 opportunist at the 2017 Presidential Election

If there was one person who had a distinct advantage at the 2017 Presidential Election, it was Madam Halimah Yacob - not Salleh Marican, not Farid Khan.

These individuals stepped forward, I believe, because of their sense of responsibility to the country. Regardless of the stage of life they were at, I believe these individuals believed that there must be a contest for the highest office of the land - that people should be able to choose.

After publicly thanking Salleh Marican and Farid Khan for offering themselves at the 2017 Presidential Election, I think it is unacceptable for PM Lee to now hurl mud at them.

Pride of being Singaporean

For me, my pride is not in being an Indian. It is in being a Singaporean. This was the reason why I chose not to contest the 2015 General Election as a minority candidate in a GRC, but in an SMC and against a Chinese from the PAP.

I went to the competition knowing that the chances of me losing were high. But I knew that I would lose not because Singaporeans would choose a Chinese over an Indian, but because it is difficult to unseat an incumbent and because of the PAP's gerrymandering. 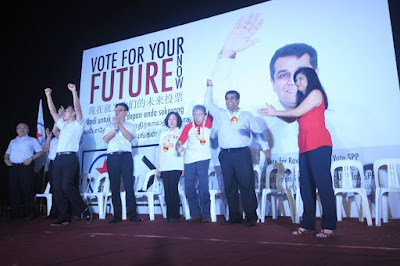 Of course the PAP has also fielded minorities in SMCs. But the PM's latest comments suggest that they only field minority candidates in safe wards, in which they are almost assured of victory.

If this was true, it casts a long shadow over the minority candidates that are in the PAP.