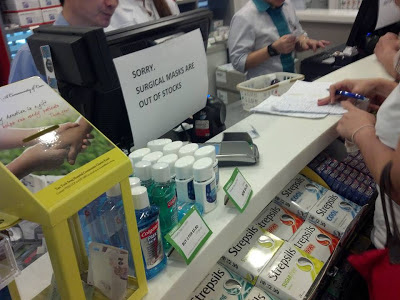 As citizens we understand that the Government of Singapore probably cannot do much about the haze. The forests are burning in Indonesia and the Indonesian government has not even ratified ASEAN's agreement on transboundary haze pollution. In the face of this, I appreciate that our Prime Minister has said that he will not play megaphone diplomacy by responding to the Indonesian Minister's uncalled for remark about Singaporeans.

The Head of NEA is in Indonesia, the Minister for Environment and Water Resources too will be off to Indonesia soon, phone calls are going back and forth between the Ministers of both countries, offers of help to put out the fire have been extended, and all these to arrest the problem as soon as possible. All these are done in the best interest of Singapore. And I support the government's efforts at trying to curb the effects of haze on Singapore.

Why then am I angry at the same time with the Singapore government? It is because I feel frustrated and helpless.

Frustrated because it is one thing for an Indonesian to remark that we are behaving like a small child, but quite another for a former Prime Minister too calls us a child and say "the Singapore Child better learn to survive the tortuous smog and haze".

Frustrated because for the sake of economic resilience workers are made to toil outdoors when the PSI had gone past 400.

Frustrated because we see children in child care centres where there's no air-conditioning, because the parents have to continue working as there's no stop work order.

Frustrated because even if the Ministry of Health promised that there are 9 million N95 masks, bureaucracy may have prevented these masks from reaching the frail and the vulnerable in a timely manner.

Helpless because you don't know what else you can do.

I had a conversation on Facebook with Koh Poh-Koon today, and like him, I too agree that we must not freeze in the face of such crisis, but should take a rational approach. But rational should also mean that N95 masks are made available to frail and the vulnerable in a timely manner, and perhaps even a stop order, at least for those who work outdoors and are exposed to PM2.5 of 270 μg/m3.

As I am writing this note, I overhear someone telling some children (I suppose not hers) playing outside, "Kids go back home. Very hazy. Not safe for you to play outside." There's hope! I know that as a nation, we will endure and emerge stronger from this crisis. We will resolve to be better prepared the next time round.