Yes, we have an activist Government in the PAP

1. Market-fundamentalist approach is central to the PAP.
2. PAP is on the side of Singaporeans.

These are very important points in understanding the PAP. The guiding principle of the PAP is that 'private enterprise is productive'. The PAP however knows that there are downsides to allowing a pure market economy approach, and so intervenes where necessary to protect Singaporeans. This is why PM Lee reiterated that the PAP is about action for the people. 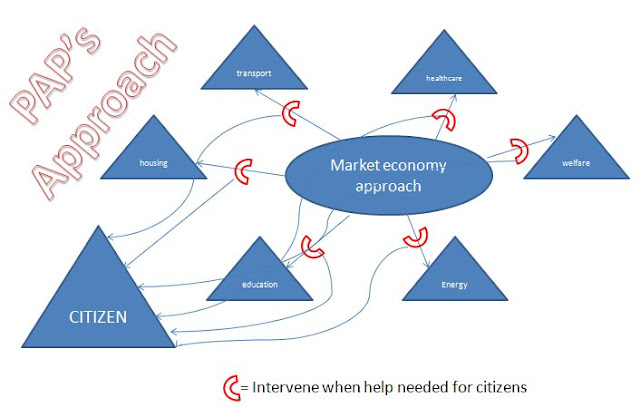 The PAP's action for the people is essentially a system of means-tested assistance in areas like education and heath, which is automatic for those who qualify. And the Party also believes in providing proactive and responsive discretionary assistance on top of the automatic assistance for various other problems such as unemployment. This is the reason why PM Lee calls his government an activist government. The PAP government intervenes in the market mechanism to render help to citizens who need it.

This is where the PAP's mantra of 'self reliance' comes in. The Party has convinced itself that those who want to help themselves know that the PAP is there to help them, and that the Party will go well beyond merely accessing government schemes in providing such assistance. The party believes that this is the best approach because the behaviour will be shaped over time, depending on how easily available assistance is.

The PAP government saw an aging problem, and immediately went into overdrive with an influx of foreigners - not because they don't care for Singaporeans, but because they believe that a vibrant economy is central to continue helping the citizens.

Never mind the possibility that if our labour force were to continue growing by 2+ percent, the population of Singapore will be over 6.5 million by the year 2030. Never mind, that with a population of over 6.5 million people, income and wealth inequality, social tensions, and overcrowding will be extreme. Never mind the possibility that extreme surge in population (mainly through immigration), will affect the Singapore Identity.

Why do you think the PAP Government is suddenly enhancing our infrastructure such as rail and roads, and build more parks, greenery and housing? The National Development Minister said that by 2016, there will be 200,000 housing streams equivalent to the size of 4 Ang Mo Kio towns on-stream. The Government is planning to build two new MRT lines, and extend 3 existing lines to double the rail network. DPM Teo Chee Hean said in February last year that the PAP government intends to extend and upgrade the parks in the next 5 years. The PAP Government is building and extending new roads, even by exhuming old cemeteries like Bukit Brown.

The biggest complain when the wave of immigration started in the year 2004 was that there was inadequate infrastructure to cope with the sudden surge of immigrants. One recent estimate by DBS Vickers expects the upcoming white paper on Singapore's population to raise its population target to 7 million from 6.5 million.

Which means that, even if the PAP is on the side of Singaporeans, in protecting citizens that need protection from the adverse effects of market forces, what remains at the core of the Party's policy-making philosophy is not the citizen of Singapore, but the idea of neo-liberal market fundamentalism. This is the reason why the Party has transferred risks from the state to citizens in areas like public housing, transportation, welfare and healthcare.

This is the reason why 'slapping the driver' is not enough because the driver (being the PAP), is quite sure about the destination it is leading this country to (unless the co-driver believes in the same destination as well). As long as the PAP is in power, there will be an influx of foreigners, there will be downward pressure on salaries of workers (especially mid to low income earners), the rich will become richer while the poor will become poorer (not as poor as some others in other countries because of the activist government, but it will be very difficult for them to break out of that poverty cycle), our young ones will feel the squeeze at schools, the property prices will keep rising, healthcare will remain expensive, CPF will be untouchable...

What we need is a bold rethink. A rethink of policies which will put not market fundamentals at the center of the policies, but one which will place Singapore citizens at the core of its policy-making decisions. A rethink where just like healthcare, education, welfare, social security, transportation...the market too will be for the citizens of Singapore.

When that happens, we won't need an activist government for we will have an active citizenry which can determine the destination it wants for its country. A nation where power will be the people's. 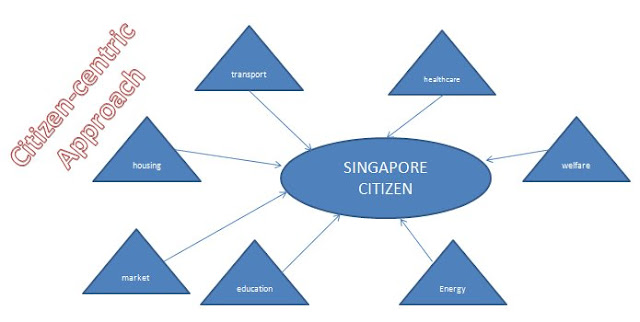 Unknown said…
Interesting view. I never thought of it that way.
I thought PAP run Singapore like a business.
January 25, 2013 at 3:46 PM

Once upon a time, our then PM proclaimed that Singapore aspired to be the "Switzerland of the East". Reading the above Reuters article on what one Swiss citizen championed with 100,000 signatures, I wonder when would we have enough of a critical mass of native Singaporeans (which partly accounts for PAP's unsaid but pressing political agenda to neuter Native Citizens with Naturalized Citizens) to (i) stand up for ourselves and our country and (ii) vote in enough Opposition MPs to first tackle our Constitutional Laws - some of which are simply unjust laws at source.
January 26, 2013 at 4:12 PM