Why did Teo Ho Pin's team award tender to company without core competencies or skills?

According to the coordinating chairman of 14 PAP town councils, the computerised management system of the 14 town councils was tendered out to AIM (a PAP controlled company), and AIM subsequently engaged National Computer Services (NCS) to maintain and further develop the system. That sounds like a sensible explanation until you recall that it was developed and maintained by NCS prior to the tender being called. 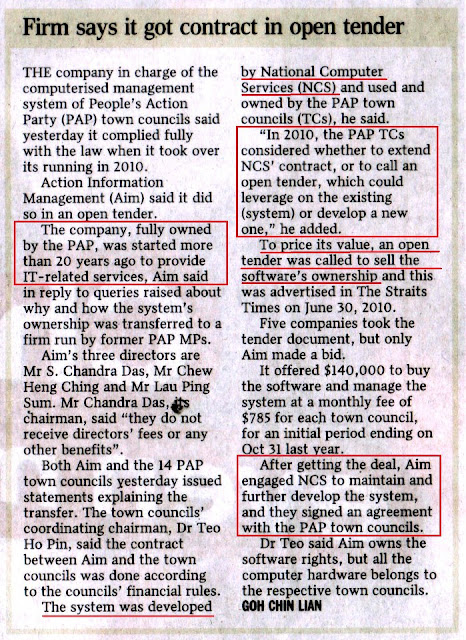 Prior to this tender, the PAP town councils owned the system, and paid NCS to develop the system, presumably using the monies residents pay for service & conservancy (S&C) charges. 7 of these 14 town councils have subsequently raised the S&C charges. AIM which now owns the rights to the database management system, currently charges the 14 town councils $131,880 per year to maintain the system.

In the face of this, the chairman of the town council has got to be more transparent, and answer the following questions:

1. How much did the PAP town councils spend in initially tasking NCS to develop the system?

2. Which funds did the PAP town councils use?

3. What was the amount the PAP town councils were paying NCS to maintain the system, prior to AIM winning the bid?

5. Could the raising of S&C charges been avoided, or a smaller raise been possible, if the town councils themselves had owned the system, and contracted NCS directly to maintain the system?

6. The fact that AIM outsources the maintenance and further development of the software to NCS after winning the tender, makes it apparent that AIM does not have the necessary core skills or competencies for such a job. That being the case, on what basis was the tender awarded to AIM?

7. Since AIM is apparently a company without the necessary core skills or competencies to be awarded such a contract, and the fact that there was only one bid, should not have the coordinating body of the 14 PAP town councils, called for a second tender to invite more suitably qualified companies to bid for the ownership of the software?

Teo Ho Pin, the coordinating chairman of the 14 town councils, has to provide additional justification as to why he considers the single bid by a company without core competencies or skills, competitive or reflective of market prices, before a decision is made to award such a contract to AIM.

Jafri said…
The relevant authority needs to look into the matter; as to ascertain if any "misdeed" had been committed by the said town councils.
December 26, 2012 at 3:40 PM