Where were the Leslie Lopezs in NParks' Brompton purchase? 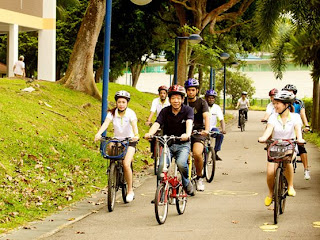 Ministry of National Development has announced that the National Parks Board (NParks) officer involved in making the purchase of 26 foldable Brompton bicycles, totalling $57,200, has been suspended.

Mr Khaw Boon Wan, the Minister for National Development, who had initially defended the purchases of the bicycles saying that the Brompton was picked because only one vendor responded to the tender with a bid price lower than the listed retail price of the same bicycle; and that "it looks like NParks has bought the right equipment", had to back down and call for an audit to review NParks purchase of the bicycles.

The audit revealed that "the reasons for purchasing the foldable bikes to enhance work productivity of NParks field staff were valid", but "it had also uncovered some discrepancies which, although inconclusive by themselves, suggested the possibility of bias in the procurement"; but these discrepancies were significant enough to warrant further investigation, and the suspension of the MND officer in-charge.

What's sad is that the mainstream media which investigated and reported the re-capture of Mas Selamat in Malaysia, did not (or chose not to) pursue the glaring discrepancies in the purchases of the Brompton bicycles, and left it to netizens to use whatever limited means they had to investigate and put sustained pressure on the Minister to call for an audit on the purchase.

Kudos to Hardware Zone Forumer 'SIM37' for his investigative posts 'CSI attempt: nParks Brompton procurement process ended up with a dodgy winning bidder!', which kept the pressure on the NParks purchase. Kudos to the bloggers and social media users who recognised something was amiss in the purchase and kept casting the spotlight on the issue.

These people refused to take the Minister at his word that there was nothing wrong in the purchase of these bicycles. And how right they were! We may all have been sorely misled if we had accepted what the Minister had said lock, stock, and barrel.

Gary said…
You are right Ravi,

The MSM is a part and parcel of the govt PR and propaganda machinery. Do you expect it to trumpet some 'reversed' PR or propaganda publicity on the govt?

It would be like biting the hand that feed you!

The MSM have by now been thoroughly and absolutely discredited that the ordinary citizens do not turn to for credible news. And the govt and the MSM has only got itself to blame for the current state of affairs.

One used to feel an incompleteness in the day's activities until one has read the local newspaper or watch the TV news. But nowadays, you can skip several consecutive days of not picking up the newspaper or sit in front of the TV news, without even realising or feeling it one it one bit. No withdrawal symptoms because the MSM have managed to wean many off their dependency on the their daily does of highly slanted news without much
July 25, 2012 at 5:23 PM