Refining MDP - a 'win-win' for the PAP Government

''It's not the end of the death penalty. But it's a move in the right direction that no one really expected". ~ author of Once a Jolly Hangman Alan Shadrake 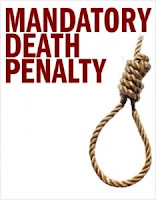 For me, it was not totally unexpected.

At that time, Mr Menon had just been sworn in as Singapore's Attorney-General. The mutual friend then said that Mr Menon felt very strongly about the mandatory death penalty, and that he felt that Mr Menon may initiate some actions to review it.

Then in June last year, I had a meeting with a Minister with some others from The Online Citizen. When the conversation with the Minister drifted to mandatory death penalty, the Minister indicated (although not in a clear manner) that something may be in the works.

So when the announcement of the refining of the death penalty regime came yesterday, it did not entirely catch me by surprise.


"Today, while our drug situation has improved, it still remains a serious threat. Looking ahead, we therefore need to maintain severe penalties for drug trafficking, including the death penalty. However, our society’s norms and expectations are changing. While there is a broad acceptance that we should be tough on drugs and crime, there is also increased expectation that where appropriate, more sentencing discretion should be vested in the courts.

Therefore, we will maintain the mandatory death penalty for drug traffickers, in most circumstances. In particular, the mandatory death penalty will continue to apply to all those who manufacture or traffic in drugs – the kingpins, producers, distributors, retailers – and also those who fund, organize or abet these activities. By their actions in the drug trade, these offenders destroy many lives. They know they are dealing with drugs and the consequences of their actions if they are caught and convicted.

However, when two specific, tightly-defined conditions are both met, we propose to make the death penalty for trafficking no longer mandatory, but to be imposed at the discretion of the courts. First, the trafficker must have only played the role of courier, and must not have been involved in any other activity related to the supply or distribution of drugs. Second, discretion will only apply if having satisfied this first requirement, either the trafficker has cooperated with the Central Narcotics Bureau in a substantive way, or he has a mental disability which substantially impairs his appreciation of the gravity of the act.

We propose to change the law such that when these conditions are met, the courts will have the discretion either to sentence the trafficker to death, or alternatively to pass a sentence of life imprisonment with caning.
The reasons for making the changes are as follows:-


As I have earlier stated, the drug menace is growing internationally. We need to find more ways of targeting those who are higher up in the drug syndicates, compared with the couriers. If the couriers give us substantive co-operation leading to concrete outcomes, such as the dismantling of syndicates or the arrest or prosecution of syndicate members, that will help us in our broader enforcement effort.

We also propose to give the courts the discretion to spare a drug courier from the death penalty if he has a mental disability which substantially impairs his appreciation of the gravity of the act, and instead sentence him to life imprisonment with caning. Currently, the Attorney-General’s Chambers exercises prosecutorial discretion in considering, amongst other things, the extent of mental disability of persons, before deciding on the charges to be brought. The Attorney-General’s Chambers will still have prosecutorial discretion even after the law is changed. However, the courts will now be legislatively vested with the discretion to consider, if they find the accused guilty of trafficking, whether the accused has a mental disability which is sufficient for the courts to impose the lesser punishment of life imprisonment with caning, instead of the death penalty.

Taken together, these provisions retain the strong deterrent posture of our capital punishment regime, while providing for a more calibrated sentencing framework when specific conditions are met. At the same time, we are providing a framework for accused persons to assist our agencies to target those who play more significant roles in drug syndicates."~ Ministerial statement on drug control framework and review of the death penalty

In my opinion, the Government of Singapore is not softening its stance on the death penalty. Neither is it bowing to the pressures of the activists against death penalty.

Due to the efforts of activists like M Ravi, Seelan Palay, Rachel Zeng, Kirsten Han, Priscilla Chia, Damien Chng, Lynn Lee, Think Centre, MARUAH, The Online Citizen and others, since at least 2005, many from the international community had begun to cast their eyes on Singapore for all the wrong reasons. The Singapore Government had touted the country as being first world in the international arena, but the global community was beginning to wonder, 'how can a first world country have laws that even third world countries have since abolished?'

In fact, the mandatory death penalty and especially the campaign to save Yong Vui Kong had the potential of casting the PAP Government as a repressive regime, which may in turn affect the leading role the Government of Singapore tries to play in the international scene. If left unchecked, the negative vibes these sent, may affect investors relation and confidence in Singapore.

So, it is for very practical and pragmatic reasons that the repressive mandatory death penalty is now being refined. Now, the Singapore Government can go out to the international community and say that they have refined the law and have given judges the power to decide on capital punishment cases; but tell the electorate (who the Government thinks don't want any softening of stance on this matter), that they actually have not. It is a 'win-win'.

The draft of the refinement which will eventually become law is still not available yet, but it will be interesting to note what kind of discretionary powers the Attorney-General's office will be be given to decide on the kind of charges they will place on the accused.

The former Attorney-General Sundaresh Menon reportedly said in April 2011 that while guidelines for the use of discretion (for the Attorney-General's Chamber) are necessary, there is no compelling reason to go public with them. But this time I think it will be important to go public with the guidelines the AGC will have because the discretionary powers vested on the Attorney General will also determine the discretionary powers that will be accorded to judges.

channi said…
Hi Ravi, can this statement actually be substantiated in any way?

"If left unchecked, the negative vibes these sent, may affect investors relation and confidence in Singapore."

no amount of political repression has ever stifled investor confidence in singapore. the relationship seems the other way round for me.
July 11, 2012 at 5:08 PM

Ravi Philemon said…
Hi Channi, if a repressive government is not bad for investment and if ROI was the only consideration, investments would have poured into repressive regimes like Burma and Iran, which are rich with natural resources and has potential to be exploited by profit making corporations.
July 12, 2012 at 8:31 AM