"One of the more specific suggestions raised during KopiTalk last Sat was to extend free healthcare for senior citizens above 65 years old. Another person responded that it is not sustainable but we should encourage senior citizens to keep fit by offering them free access to SSC sports facilities, eg swimming pools. I tend to agree with the latter.

If it is a blanket provision to provide free healthcare for everyone above a certain age, the government (ultimately taxpayers) will have to shoulder increasingly heavier financial costs, given that life expectancies are rising and medical techonologies are improving. However, no one should be and will be denied medical treatment just because one cannot afford to pay." 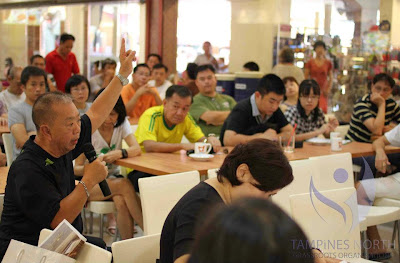 Because of the many years of Ministry of Health's National Healthy Lifestyle Campaign, not only Mr Baey, but also citizens like the 65-year-old gentleman, have come to believe that living healthily is synonymous with not falling ill. No matter how fit one keeps himself or herself, he or she cannot escape from illness.

The population of Singapore is aging rapidly. The proportion of population who are 60 years old and older has risen from 4.1% in 1961 to 11% in 2001; and is expected to reach 27% in 2030. The elderly in a country spend more on medical care than the young, and it is therefore, intuitively correct to assume that the aggregate healthcare rises with higher percentage of elderly population in Singapore.

Even the Health Ministry has realised that it cannot continue to spend less than 4 per cent of the GDP on healthcare, and had recently increased the healthcare budget from $4 billion to $8 billion a year. Just last week, the Health Ministry announced proposals to widen the coverage of MediShield, including increasing the lifetime limit from S$200,000 to S$300,000.

While responding to questions on the widening of Medishield coverage, the Health Minister had said that "the authorities were in two minds about whether to extend coverage to congenital and neo-natal conditions (because) once it is covered by insurance, parents and doctors may pursue more expensive treatment and overall, this may raise the cost of healthcare for children in Singapore'.

Free healthcare for anyone will eventually become too heavy a burden for the society to bear - that I agree. But if the 3 Ms (Medisave, Medishield and Medifund) are so broken that whatever tweaks you make to it, you may not provide adequate coverage for citizens, then it's time to explore other universally affordable healthcare system.

This is the reason why I feel that Singapore Democratic Party's National Healthcare Plan (click HERE) serves as a significant benchmark proposal, and so should not be overlooked. Drafted mainly by a group of concerned medical practitioners, this alternative healthcare proposal by SDP places citizens well-being at the core of its proposal.

I agree with the SDP's national healthcare proposal that healthcare is not a commodity. I appreciate that with a two-bedder hospital system, the proposal has placed disease-containment at the heart of it. What I have difficulty reconciling with is the 'single payer plan'. I think a 'single payer plus' (where private insurers can add to what the state would offer) would be a fairer system. But it is precisely this type of debate that SDP's proposal should spur.

kranser said…
Ravi, a lot of thoughts come to mind when I read your last paragraph. First, you and I know that there are hundreds, if not thousands, of our citizens who are not in a position to afford medical treatment. And because of this, many just decline it. They would rather suffer in silence than be shamed in public.

Because that's what happens at the polyclinic. Say, X honestly tells the clinic staff he doesn't have enough money to pay the bill, OK, he will be excused on that occasion, but his bill is not waived. He will be referred to the MSW or Medical Social Worker. But the appointment will be at least 2 - 3 months later.

Pending that, if X visits the clinic again, he will be reminded in front of everyone about his previous arrears. And, boy oh boy, I've seen it happen. X just doesn't know what to say. And they go on asking and tormenting the poor guy.

This is only one of the many obstacles Mr X will have to overcome before being given a 6-month waiver -- subject to deductions from his Medisave, mind you. Also, certain drugs are not included in the waiver. Besides, not all waivers are 100 percent. So where does that leave Mr X?

So, you see, the number of obstacles Mr X has to overcome before he is given financial assistance. Now, from a country that doesn't bat an eyelid in wanting to loan US$4 billion to the IMF -- no questions asked or allowed -- this kind of treatment is just disgusting, to say the least. Don't you agree?
November 3, 2012 at 12:11 AM