TRE does not drive xenophobia 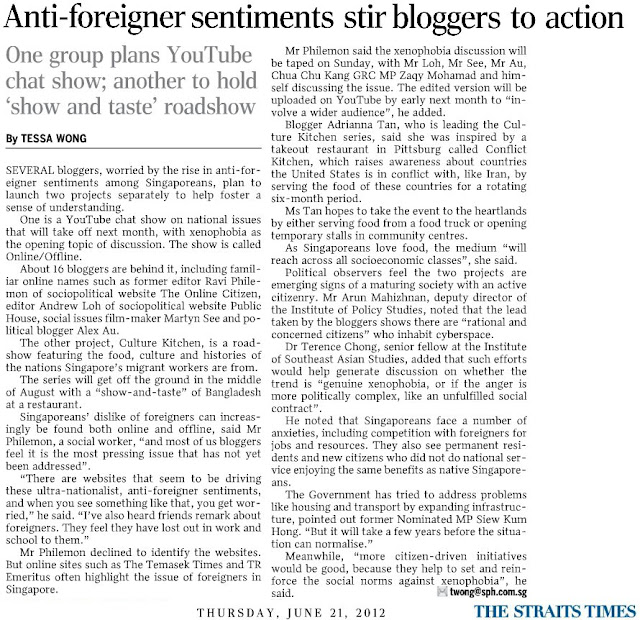 '"There are websites that seem to be driving these ultra-nationalist, anti-foreigner sentiments, and when you see something like that you get worried," he said. "I've also heard friends remark about foreigners. They feel that they have lost out in work and school to them."

I want to thank Tessa Wong for the exposure ST has given to this initiative of the bloggers. As she rightly highlighted, I refused to identify the websites that 'seem to be driving these ultra-nationalist, anti-foreigner sentiments', but I think it is important to contextualise what I had meant when I said that.

I think blogs and social media are a reflection of what is actually already being talked about in homes, coffee-shops, office pantries and such. That is why I said that even if they 'seem to be driving' these sentiments, in reality it could most probably be the other way around - what happens in real life is influencing what's being said in blogs and social media.

In that sense I think that it is rather unfortunate that TR Emeritus was mentioned as one of the online sites which 'highlight the issue of foreigners in Singapore'. Taken in the context of the article written, it could be read that TR Emeritus (TRE) is driving xenophobia in Singapore. I disagree with that.

I know at least two editors from TRE (one in person, and the other through email conversations), and I know that TRE has taken great pains to differentiate itself from its predecessor. The editors of TRE have also communicated in online and offline platforms that their website is about reflecting (not driving) ground sentiments, which may mean that the issues of foreigners in Singapore which is highlighted in their website, could very well be an actual reflection of what's happening in society.

Richard Wan (one of the editors of TRE) is part of 'Online/Offline', a bloggers' initiative as well.  And like the rest of the bloggers, Richard too felt that xenophobia is a pressing issue which has not yet been properly addressed, and was very supportive of the initiative from the very beginning. I highly doubt that a website that he is associated with Richard will be responsible for driving xenophobic sentiments in Singapore.