The ISA is an impediment to building an inclusive society

June 03, 2012
the following is the speech I delivered at 'That we may dream again: Remembering the 1987 'Marxist Conspiracy': I was serving my National Service when the news of the detentions came. It was front page news. The accusations against them were serious. The arrests began in the early hours of the 21st of May 1987 and within a span of a few hours, 16 men and women, most of whom were social workers, dramatists, Roman Catholic Church welfare workers and lawyers, were arrested by the Internal Security Department. They were alleged to have engaged  in ‘communist united front tactics with a view to establishing a Marxist state.’

The government communicated to me via the newspaper that the conspirators had links with Filipino leftists and proponents of ”liberation theology,” as well as with European Marxists and Sri Lankan separatists. The detainees were then accused of trying to use Roman Catholic, student and other groups to build a legal front as a cover for political sabotage. It did not for a moment cross my mind, or perhaps it did not matter, that it will be almost impossible to link some of these accusations with the others, as they were as far as the east is from the west.

How can these people undermine the progress of the nation (I thought)? Then-Prime Minister Goh Chok Tong reaffirmed that I was right in my disdain of these people. In addressing a conference of the National Trade Union Conference the Prime Minister stressed that political stability was an essential ingredient for wage increases; He pronounced that should the political conspiracy have succeeded, "you can kiss your wage increases for this year goodbye”.

As a side-note, we have had political stability now for over fifty years. I wonder, why then, have the workers been underpaid by more than 100 percent? 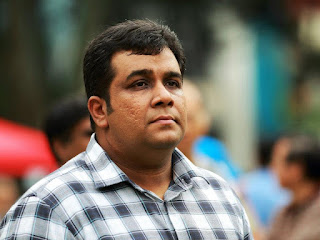 But the ‘threat’ was very real.  I remember the Foreign Minister, Mr. S Rajaratnam complaining that over 200 organisations from around the world had sent protest letters to the government indicating that they do not believe that there is an internal Communist threat in Singapore.

It did not matter that a Statement from Lawyers Rights Watch Canada stated that some of the ‘conspirators’ did not even know each other prior to the arrest, or that the only opposition Member of Parliament at that time, Mr. Chiam See Tong, had called them “innocent young idealists.”

I believed what the Home Affairs Minister, Mr S Jayakumar had said that “critics abroad, if you want to understand the action, you must also understand Singapore’s unique circumstance and problems”.

It also did not matter that the International Commission of Jurists, who then continually called the then Singapore government “to prove this alleged ‘conspiracy’ in open court, and give those detained a fair trial”, deduced in their investigative report that the real motive for the arrests and subsequent detention without trial of the alleged marxist conspirators, is to quash internal opposition and criticism of the Singapore government and not to protect the security and welfare of Singapore society against a Marxist conspiracy.

I thought the words of then-Community Development Minister, Wong Kan Seng that foreigners did not understand Singapore politics, which is based on consensus building and not confrontation, were wise.

For many, many years since then, I went about helping the disadvantaged and the disabled in a quiet, consensus building way. When I had people who were being evicted from their rental flats because they had fallen behind in their rental payment, I will try and negotiate quietly with HDB on their behalf - because it was important to have consensus. If they refused my explanations and acted like little Lee Kuan Yews, I quietly did whatever I needed to do, to ensure that these families were not evicted.

When I brought people to see their MPs at Meet-the-People-Sessions, and they refused to even give me eye-contact, much less listen to the problem this people had. The grassroots leaders like priests who stood before god, told them that not everyone can see the MP.

I had given excuses to the people who came away without being able to meet their MPs personally. 'They were busy' I explained. How can I confront? What will become of the country?

Then, I went away to the USA. There, I witnessed how the community workers advocated for those that they were caring for, not always in a passive manner, but also where necessary, through confrontation and conflict.

It took me a long time to accept that.

But I was seeing with my own eyes that problems were being solved, and more importantly that the people who were advocating in this manner, were not anarchist - or wanting to bring the state down. In fact, they loved the community they were in.

I went through a process of unlearning and relearning, that expressing sympathy, empathising and speaking up for what you believe in, need not only be done in a quiet, consensus seeking manner.

Today, I still help families and persons that are disadvantaged. Sometimes I do it in a quiet, consensus seeking manner, but there are other times when the problem gets solved only with confrontation. Consensus-seeking or confrontation - it is not the method that is used which is important - what is important is, is the problem of the people solved?

What then had kept me from being more involved in helping people in need, try and find better solutions then?

Today when I look back, I can say for sure that it is the arrests under the Internal Security Act of 1987.

The popular narrative then, had convinced me that nothing good can come if you are not compliant, always work within the system and be consensus-seeking. If you don't do that, then you are not being patriotic.

Even then, for a long time after I had accepted that there was no Marxist Conspiracy, I refused to believe that we don't need the Internal Security Act or ISA. We need it to combat the terrorists I reasoned. But the more I came face to face with the facts, the more I read the stories of the detainees, the more I interacted with the likes of Tan Tee Seng and Teo Soh Lung, the more I began to see more of myself in them.

I am convinced otherwise now.

If I had done what I am doing today in the mid 80s, I would surely have been detained as well. So does that mean that since I have not been detained under this draconian act today, we can let this legislation be?

No! Because, as President Dr Tony Tan rightly said, I quote "the internal security act is a very blunt instrument." Yes, you can say that you will only use it in the most extreme of circumstances, but what guarantee is there that the government will only use it when they feel that they really have got no choice.

And of course I need not elaborate why feeling is very subjective. Even paranoia is a feeling.

Lee Kuan Yew said in his book, 'Lee Kuan Yew, the man and his ideas' that, "Everybody knows that in my bag I have a hatchet, and a very sharp one. You take me on, I take my hatchet, we meet in the cul-de-sac." I wonder, if the hatchet in his bag is the ISA?

Whatever the real reason, the arrests and detention without trial of the ‘Marxist Conspirators’, repressed an entire generation of young Singaporeans from involvement in any activity that could be termed “political”. People of my generation - people who are now in their very late thirties and forties.

The fact remains that the ISA can be used today, as it was used in 1987, to curb the enthusiasm of young people who want to be engaged and have a say in the community and society.  If that happens, it will set the country back by at least another 25 years.

So, I not only support the call for a Commission of Inquiry because we need a proper closure to this dark episode, a stigma I must say, in the history of Singapore.

I not only further echo those that call for the return of the sons and daughters of Singapore who have been forced into exile because of the ISA.

I especially strongly urge, ABOLISH THE ISA. And if terrorism is the concern, then legislate terrorism-specific laws. 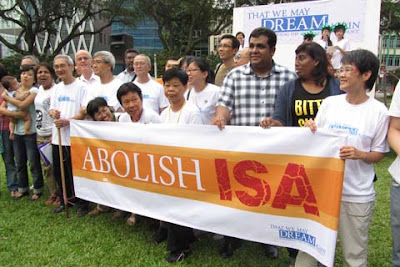 There were about 500 people at the event today. I appreciate the bravery of all the people who chose not to forget this dark episode in the history of modern Singapore.

This is how The Straits Times covered this event: 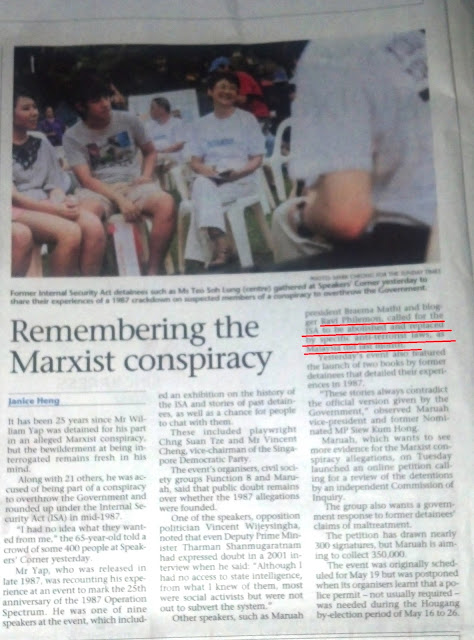