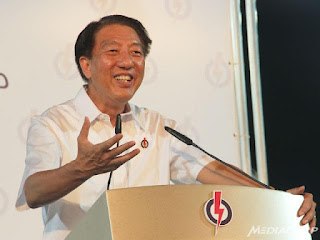 This Presidential Election (PE) is turning out to be the 'Battle of the Tans'. Of the 3 Tans who have put themselves forward for the race, I am still inclined to vote for Dr Tan Cheng Bock in the coming election, and my reasons are very rational.

Dr Tony Tan
Yes, I am happy that he invited the bloggers to the media conference where he announced his intention to run in the PE.  But that invitation happened because by his own admission, bloggers cannot be ignored any longer because they have a "role in news dissemination and commentary in Singapore".

Although Dr Tony Tan said that he is running as an independent candidate, everyone from the government, from the current President to the Prime Minister, have come out and endorsed him (even if it is not explicitly).  I suspect what will happen next is the NTUC Chief Lim Swee Say, will come out to say that Dr Tony Tan is a suitable candidate and that the labour movement will support his candidacy.