Attitudinal change of blue-collar workers must start with Government

"Ummm. I've been working in NY restaurants for 16 years, and you can make an easy 6 figures per year at the right places in NYC." - NY Waiter in Sound Beach, New York

In the late eighties, I had a friend who was going to marry a waiter and she was quite proud that she'll be marrying him. When the friends's mother came to my house to invite us to the wedding, she was happy that her future son-in-law was earning a good salary as headwaiter, and that he had good prospects for promotion within the hotel he worked for, as he was quite hardworking.

Almost 25 years later, Singapore's Deputy Prime Minister is hoping for a societal refomation where the mother-in-law will be happy that her daughter is marrying a waiter.


"We need a society where customers treat blue-collar workers with respect. And that requires some attitudinal change. A society where the mother in law is quite happy when the daughter says that, 'I'm going out with a waiter'. That's what it is. Because it is a good job, pays well, he's enterprising, and he's going to do well." Deputy Prime Minister Tharman Shanmugaratnam speaking at National University of Singapore's Students' Political Association's Ministerial Forum on 3 April 2012

To me it certainly seem like the Singapore policies of the past, has come at the expense of the current generation. That the political leaders in Parliament chose to pass the burden of being 'cheaper, better, faster' from the last generation to this.

On Saturday (31 March 2012), I was reading Radha Basu's special report in The Straits Times, 'dirty secrets of the cleaning industry' and was actually not surprised that the median gross wage for cleaners and labourers has dropped from $1277 in the year 2000, to $960 in 2010. 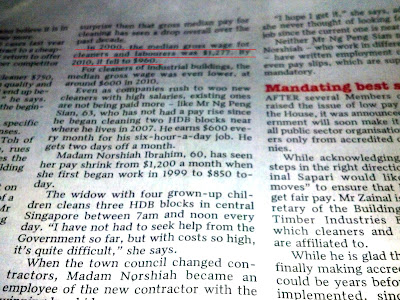 In early 1990s, I was trying to save a marriage. The man had left the woman, had applied for divorce and intended to marry another person after the divorce. The woman despite being better educated and working as a clerk, did not want her marriage to the man who was a HDB cleaner, to end.

The woman felt that he still loved her and that he was making that decision because of negative influences from her in-laws. She did not want that relationship to end, also because he earned well, and was a good provider.

When did this change? It changed with the Town Council Act of 1989, and the town councils progressively taking on the responsibility of estate maintenance from HDB. Now, there are no more HDB cleaners. The town councils now outsource estate cleanliness and maintenance to private contractors - private contractors with the lowest bid (until recently).

When you have plummeting salaries, have unfair (perhaps even exploitative) working conditions in the guise of protecting the 'interests of residents' (see coordinating secretary of PAP's 14 councils HERE), and have no unions speaking up for you, what do you have?

A society which treats blue-collar workers with little respect.

I was in the United States of America for a few years, and it is quite amazing to see the pride blue-collar workers had in themselves. The crane operator, the plumber, the waiter, the electrician, the car mechanic...

My children had friends in school whose ambitions were to be car mechanics and even farmers.

Why? Because these jobs were not looked down upon, as the jobs had no exploitative conditions attached, because they had proper unions to look out for them, because it paid well, because (quite unlike Singapore, where the wages of blue-collar workers like waiters, cleaners and pest-controller have dropped over the years) they can expect their wages to increase over time. 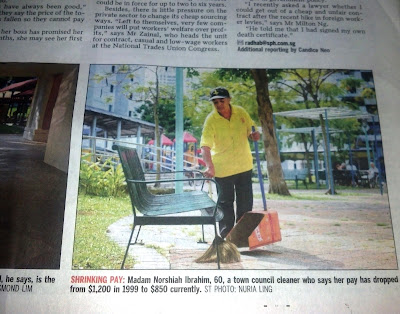 The current situation for blue-collar workers mean that even if they were enterprising enough, they cannot do well, because they cannot sustain a family.

And no mother-in-law is going to be happy if her daughter wants to settle down with someone who cannot support a family.

ninow bay said…
I agree with most of the passage but I disagree with the minister as his message is merely flippant and if not followed by necessary policies will only be a conspiracy to fool unwitting Singaporeans to join the ranks of exploited and justify the continued exploitation of dreamers from our innocent neighbouring countries.
April 5, 2012 at 11:21 PM

Unknown said…
Good article Ravi. But I think race background is also a huge hurdle. Even with increased salaries, I can't ever imagine any Chinese parent wanting their son to grow up to be waiter.
April 27, 2012 at 9:42 AM