PA will openly campaign for PAP

Although PA's grassroots organisations are supposedly separate and independent from the PAP, many grassroots leaders are also PAP branch activists, and the PAP's defeat affected grassroots work in the GRC. Former PAP chairman Lim Boon Heng said in an e-mail to The Straits Times that 'after the May GE, there was a slowdown in (grassroots) activities. In some parts of Aljunied GRC, it has been less than what we normally expect post-elections'. Last week, The Straits Times reported that Mr Lim was assembling a PAP task force to 'take back' Aljunied GRC for the ruling party. He is also a special adviser to the chairman of the PA, who is Prime Minister Lee Hsien Loong. Mr Lim said he is working on ensuring that 'there is no let-up' in Aljunied GRC when it comes to grassroots activities, in the face of some grassroots advisers stepping down. 'We will appoint new advisers. These will be people who can fill that role, not necessarily politician-wannabes.' 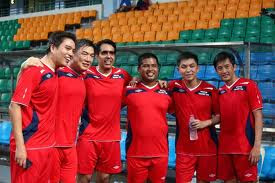 I helped Jeannette Chong-Aruldoss in her campaign in Mountbatten in the last General Election. There were many memorable moments and many invaluable lessons I learnt while helping her in her campaign.  But one incident which stands out in my mind is the encounter with a People's Association (PA) leader from Mountbatten.

It was still early days and nomination papers have not yet been filed. But there was a lot of buzz that Jeannette was going to contest Mountbatten. A group of us met at the void deck of a block in Jalan Batu to discuss her campaign and after the discussion we walked to the hawker centre at Blk 4A for some snacks. As we were walking towards the hawker centre, Jeannette spotted someone she recognised (someone known to some of her family members as well) and stopped to greet him. The person was a PA leader for that constituency. He was wearing a PA T-shirt (red part added on 8/12/11 for clarity).

I was shocked! Here was a person from People's Association, which is supposed to be apolitical and he is openly campaigning for a PAP MP! And worse, he was asking someone not to contest in that area and so have a walkover (at least that's the message I got).

And today we read this piece of news from ST. Lim Boon Heng is a special advisor to the Chairman of PA (PM Lee Hsien Loong) and he is unashamedly going to use a tax-payer funded statutory board for a political purpose - to fight another political party.

Here we have the Workers'  Party playing football with the incumbents to show that they will not oppose for the sake of opposing, and then you have someone like Teo Ser Luck (playing on the same team) who has said that he will "step into the breach" in Aljunied and with the help of the well-funded People's Association hope to unseat Workers' Party from that constituency.

Well you know what...for a start, I think the MPs from Workers' Party should stop playing soccer with these guys from the PAP. The PAP has absolutely no concept about fairness and no guilt-feelings whatsoever in using the institutions of the State for its own political advantage.