That article on the senior citizen

November 16, 2011
I wrote an article about a senior citizen recently for TOC (http://theonlinecitizen.com/2011/11/a-senior-citizen-asks-why-should-i-seek-help-now/). Some people were asking what my purpose was in writing it, because besides factually narrating the difficulties of that elderly person, I did not cast any of my own opinions in crafting it.

Let me say here why I wrote that article. I wrote it because I was angry. Angry that here is this older person who has sufficient money in CPF to pay for her medical needs, but is not able to do so.  Angry that despite having sufficient savings in her Medisave (which was meant especially as a safeguard for the old age), she still has to depend on handouts to get herself treated.

I wrote that article because I was amazed at the resilience of that older person, and surprised that the Government besides talking about the need for people to be self-reliant, still attempts to keep them indebted to them through handouts such as these. Where is the walking the talking? It is as if she is being penalised because she is healthy enough to be treated as an outpatient. The CT-Scan that she has to go through would have been absolutely paid-for through her Medisave if she was an inpatient (meaning she becomes too sick and has to be hospitalised).

A few well meaning people wrote to me and said that there are a lot of help schemes available for this person. I wonder...why is it so difficult for some people to understand that people don't want to be helped all the time - especially if they have money of their own to help themselves. 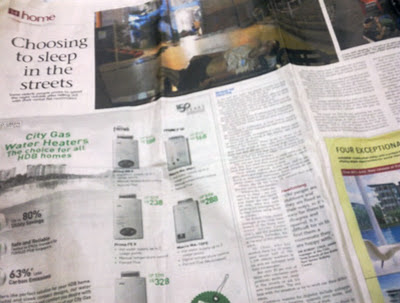 How many of us get along all the time with your mother, brother, sister, wife, children...? I mean even people who are so close and related by blood squabble over many issues like cleanliness, toileting habits...just because they live in the same house, and so share the same space.

And here you have a stupid HDB rental housing policy which specifies that only two adults (even if they are not related to each other), can rent a flat from HDB. They even do you a favour and give you a list of people who are in need of a partner to rent a flat. And if you cannot find a partner, then SORRY! you shall have no house of your own.

The article by Sunday Times could have been deeper and explored the deficiency in the HDB rental housing policy being the main reason why some elderly in SIngapore 'choose to sleep in the streets'.

What about Mdm Perumal who I interviewed for TOC? Since her daughter passed away last year, she has roped in a stranger (who seldom stays in that house) to be the co-renter of her rental HDB flat. A flat - no wait a minute...a HOME - she has lived in most of her life.