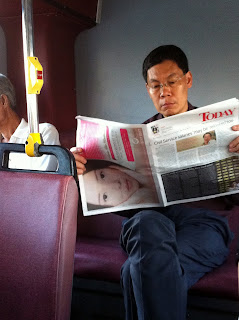 Would anyone be surprised that the pastor actually reads the Bible, that the plumber actually opens the clogged sink drain, that the mee goreng man actually makes mee goreng?

Why then make comments like "Hurray, Mr Lui Tuck Yew is so down to earth", when Mr Lui was just doing his job when he took the bus and the MRT?

I however, cannot understand how the Transport Minister can open the Today newspaper fully to read on the bus. He seems to be sitting in the back seat and so probably had enough space to fully open the paper.  But the driver must also have been driving very carefully, without braking too much or making sudden stops, so that the Transport Minister does not fall forward.

If only all of us could have such fantasy rides on our public transports.

Mr Lui (who was the former Minister for Information, Communication and Arts) has also done a good job of promoting the mainstream media (Today and My Paper), on his rides in our public transports.

Err...who is the photo taker ah?

Some people commented on the link of this post on FB that "the CEO of pizza hut does not make pizzas" and that the "CEO of taxi company does not ride taxis". They are missing the point of this post.  What I am saying is that there is really no surprise if the pizza chain boss tosses pizza, or the taxi company chief drives taxi.

The only thing is, almost everyone recognised this new boss of public transportation.
Opinions

glenn said…
It's less of a surprise that this is all staged. If you consider the angle of the photo of him sitting in the bus, it's so obvious someone is taking the photo and he's just posing for it. Gullible Singaporeans are gullible.
June 3, 2011 at 1:33 PM

glenn said…
Gullible Singaporeans are gullible. It's so obviously a staged photo op. Lui Tuck Yew must be completely oblivious to the world around him if he didn't know someone was squatting in front of him in the bus taking a photo of him.
June 3, 2011 at 1:34 PM

juice said…
great use of parallels to illustrate your point (: I wonder if he's going to do this consistently though?
June 3, 2011 at 1:37 PM

Eleanor said…
It's about time the transport minister experience the crowded train himself! But he should not do it as a one-off thing because he won't feel any impact. Our frustrations are pent up feelings over a long period of time with daily encounters. So he actually should do it every day for an extended period to fully comprehend our frustrations. To top it off, he should try walking 10 mins to the train station soaking in perspiration and then take the overcrowded and warm (aircon often not cold enough) train to work.

But I understand that he is a busy man and may not be able to do so everyday. Then he should still do it every week for an extended period.
June 3, 2011 at 3:38 PM

Rudolph Lau said…
Well .. For the least we know one minister is trying to connect... This is encouraging since we had not seen one doing this for a very long time. Be it staged or not, we will judge him based o. His policies only.
June 3, 2011 at 6:32 PM