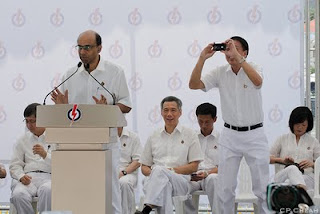 This straddling of the conservatives and the progressives is seen in the rest of the cabinet as well. On the one side you have people who are perceived to be conservative hardliners like K Shanmugam and Lui Tuck Yew; and on the other you have those that come across as being moderate progressives like Khaw Boon Wan and Yaacob Ibrahim.  Even among the newbie Ministers, you have someone like Chan Chun Sing and then, there is Tan Chuan Jin.

I think the Prime Minister intends to bestride the conservative-progressive divide in the People's Action Party (PAP), with his new cabinet line-up and through this straddling take a more interventionist stance in the nation's political, social and economic scene.

It seems from the article "Lifting the Party Whip: PAP MPs share their views" that the Party Whip was lifted only twice in the last ten years. The result being (in my opinion) PAP MPs are parlaysed from voting without the Party Whip.

Despite what MPs like Lim Biow Chuan says, one can only debate as robustly as he feels convicted enough to vote.  If PAP MPs already know beforehand that they would have to vote a certain way because of the Party Whip, why even debate?

The Prime Minister's 'radical change' is only as radical as the monolith, PAP would allow him.  His actions even in the new cabinet line-up, seem to suggest that he will be hesitant to break away from the old.  Despite accepting the resignations of Lee Kuan Yew and Goh Chok Tong, the PM still retains Lee Kuan Yew as Senior Advisor to GIC and Goh Goh Chok Tong is appointed as Senior Advisor to MAS with the honorific title of Emeritus Senior Minister. Which make one wonder, why wasn't the title Emeritus Minister Mentor given to Lee Kuan Yew and what kind of advisory roles are in store for Wong Kan Seng, Mah Bow Tan and Raymond Lim?

I suspect that the Prime Minister's reluctance to break away from the old, will be the one main factor which will gnaw away the trust the people of Singapore still have in the PAP.

Anyway, no one who has been in the old, straightaway desires the new.  "The old is better", they say.
Opinions

footix24 said…
PM Lee did clarify during the press conference that the Emeritus title was offered to LKY, but he rejected it.
May 19, 2011 at 4:25 PM

Unknown said…
"Despite what MPs like Lim Biow Chuan says, one can only debate as robustly as he feels convicted enough to vote. If PAP MPs already know beforehand that they would have to vote a certain way because of the Party Whip, why even debate?"

If the points delivered during debate make sense, there's possibility that the policy is adjusted before being put for vote.
May 19, 2011 at 6:07 PM

Anonymous said…
Whip or no whip is beside the point. The real issue, the whole team was ruled by iron fist. And if you speak your mind and they dont like it, by the next GE, you are asked to retire.

This is why you end up with a bunch of yes man, who defended whatever the master said. You have people like KBH and Halimah who defended fiercely and now they are rewarded with promotions.

So LHL needs to know if he is going to be an open minded leader or still the autocrat. When you are autocrat, no one will voice out, they just keep sucking up.
May 19, 2011 at 8:36 PM