Question Time with the Prime Minister 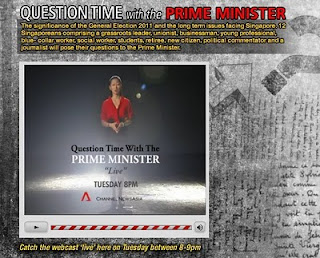 I sent in this question to Channel NewsAsia for their 'Question Time' programme where the Prime Minister of SIngapore has promised to answer the questions of Singaporeans.

A large segment of Singaporeans have secondary school or lower education. Many in this segment have such lower qualifications because higher education was not encouraged in the past as there were fewer industries which would support graduates of tertiary institutions. These people now have poor marketable skills, which will mean lower salaries and which is further mitigated by the lower salaries that foreign workers ask for doing a similar job. The lower earning capacity of this segment of Singaporeans, contributes very little to their upward social mobility.

In your 2009 National Day Rally Speech, you mentioned 3 areas of future growth which may create jobs and hence benefit this segment of population:

The IDM is a niche industry and this segment of Singaporeans may not adequately benefit from job creation in this sector. The high-end manufacturing industry may employ fewer workers than the traditional manufacturing sector, because of their greater reliance on automation and technology. Which leaves the integrated resorts as the only industry from which a major portion of this segment of population expect to find employment in in the future.

Against this backdrop, my questions are these:

1. Is there a forecast for other growth industries to come to Singapore, to create future jobs for the benefit this segment of Singaporeans? If so, what industries are these?

2. How many jobs have the two integrated resorts created so far, how many more jobs will they create in the future and what percentage of these jobs have gone to Singaporeans and will go to Singaporeans from this segment of the population.

3. The new jobs created, will they provide better salaries, with better yearly increments for the Singaporean workers, so that these workers median wage can rise by thirty per cent in ten years as indicated by the Finance Minister in this year's Budget debate in Parliament?

I personally know of people who have post graduate qualifications but are now applying for jobs which would pay them less then $1500. I also know of people who have upgraded and re-skilled under the Workforce Development Authority's WSQ programme only to find that they are unable to land a job or if they landed one, that the new job pays them significantly lower than their previous job.

My concern is that these talks of better salary for a better life through upgrading, re-skilling and higher productivity, must turn out to be empty promises which will only serve to dash the futures of these people.