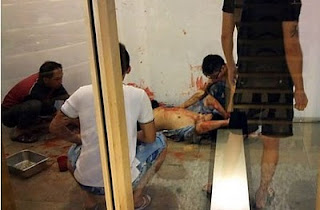 It was sheer madness that a 19 year old young man was slashed to death in broad daylight on Saturday.

A friend who lives a stone throw away from Downtown East shopping mall says that she was very disturbed by the teen's murder, which happened so near her home. She says, "this goes to show how selfish Singaporeans are. I am sure there were more than 10 people in that overly crowded place. They could have together prevented, helped or done something. All just stood around watching a youth being hacked to death!"

From the some of the photos published in the mainstream media, it seems that many people continued eating at the Sakura restaurant even when the youth collapsed from his fatal wounds.

So how? Do you really blame the people of Singapore for not doing more in a situation like this?

I say, "don't blame the people but...BLAME THE GAHMEN LAH!"

The people in Downtown East were probably waiting for the gahmen to come and put an end to the sheer madness they were witnessing. But sadly, the gahmen people only came after the poor guy died. The diners in Sakura restaurant must have probably thought that the gahmen people will come before something bad really happens. But no lah, by the time they came, the 19-year-old had already died.

This is what happens when you govern a first world country with third world mindsets. The people who are governed will also adopt a third world mindset, which typically thinks like this, "i eat, i live, i shit - goal achieved - purpose of birth met. Others die, not my problem".

But do we blame the people for adopting this mindset? No lah! How can! This is survival 101. If you don't adopt a third world mindset, how to survive in a country which is governed like the third world?

So I say, "don't blame the poor shoppers at Downtown East. Don't blame the diners at Sakura. If you must blame somebody...BLAME THE GAHMEN LAH!"

My deepest condolences to the family and friends of Darren Ng.
Bloggers

teo soh lung said…
Blame the gahmen is correct. But I don't agree that we have third world mentality. If you mean poor countries by third world, I think they have the best community spirit in the world and they would not allow a murder in eastend.
November 15, 2010 at 9:37 PM