Competition of ideas is needed for a workable democracy 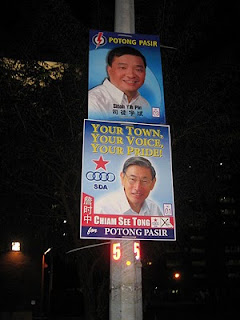 Mr Theodore Yeo was wrong in comparing the democratic model of the United States of America with that of Singapore in his letter titled “what matters is a democracy that works” (ST forum dated 25 Sep 2010). You cannot compare apples with oranges.

In the political system of Singapore the legislature (parliament) selects the government (the executive power) - a prime minister, along with the cabinet ministers - according to party strength as expressed in elections. In this system, the executive acquires a dual responsibility: to the people as well as to the legislature.

The difference in the executive branch creates the key difference between the two systems. In the American system, if the executive and the legislature branches are controlled by members of different parties, the end result is usually partisan politics, with each side blaming the other for the the coutry's problems and lack of action.

This is unlikely to happen in the parliamentary system like that of Singapore, as the executive and the legislative branches have to be from the same party, hence creating more accountability.

It is precisely because the elected officials in a parliamentary democracy forms both the legislature and the executive powers, that vigourous competition of ideas by various parties, becomes absolutely essential. For by voting for competing ideas, the electorate express the kind of future they want for their country.

And no political party can compete for the vote of the people without putting forth their ideas for a better Singapore. One cannot fault any political party that they have not put forth any alternative viewpoints, when it is they who has failed to look up what the party actually stands for.

For this to happen, we need a civil service which is not only strong and efficient, but is also non-partisan.

Perhaps with a competition of ideas, Singaporeans could have voted for a party which stands on the platform of a better equality of incomes and that of arresting the income divide.
Opinions