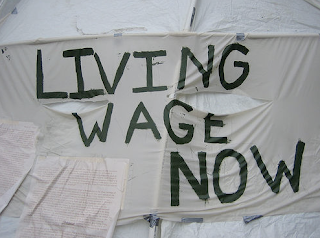 Even though Singapore has accelerated from being a ‘third-world’ country to being a ‘first-world’, high cost society in less than half a century, many Singaporeans continue to live in this high cost society while accepting lower salaries.
The call for minimum wage is not new (See HERE, HERE, HERE and HERE). In January 2009, even the People's Action Party MP (Member of Parliament)), Inderjit Singh commented that, “If we would like to see Singapore moving up as one of the most developed countries in the world, and costs increase accordingly, lower income Singaporeans might need a minimum wage to survive.” Mr. Singh also suggested that the government should “incentivize companies to implement it (minimum wages), or the government has to supplement wages to a minimum level.”
Of course minimum wage is a great tool which would force the employers to maximise productivity, rather than undercutting each other with cheap labour.  It is also central in getting people off benefits and in being self-reliant.

But the debate and advocacy for raising sub-standard wages should go beyond the minimum wage to advocating for living wages. Mr Tan Kin Lian (former Chief Executive Officer of NTUC Income) is one of the first proponents for living wages in Singapore.  In his speech in December 2008, at the Speakers' Corner, Mr Tan reportedly said, "In the present economic environment, those who lose their jobs find it difficult to find another one. He said that we need a living wage, not just a minimum wage, that enables the recipient to pay for his or her housing needs and food as well as live a humble but dignified life. Some people now have to work 16 hours a day or get two jobs to survive. Is this social justice?"
What is a living wage? A living wage is an income which will provide the disadvantaged segment of the population with minimally satisfactory living conditions, to the context of Singapore. It is different from minimum wages, as those drawing minimum wages, could still live in poverty. Living wages, will give the disadvantaged a right to life, liberties and opportunities.
The living wage should be tied to the price of renting a room from the open market (cost of average room rental in the open market - divided by 30 - multiplied by 100). Why? Because, nobody should spend more than 30% of their income on accommodation, as then they become cost burdened and may have difficulty affording necessities such as food, clothing, transportation and medical care. In the current context of Singapore, with the open market rental for common rooms hovering around $400 - $450, an appropriate living wage would be $7.95 per hour; or $1400 per month for a 44-hour work week.
By paying people a `living wage,' we show respect for them and what they do. We enable them to give something back. They have the income to spend more, local businesses, professionals, schools and even religious organisations, benefit. We also benefit as a community because people who are able to meet their basic needs by working a 44-hour week have time and energy for their family, their faith community, and civic life.
income disparity