The seminar, Vincent Cheng and the National Library Board 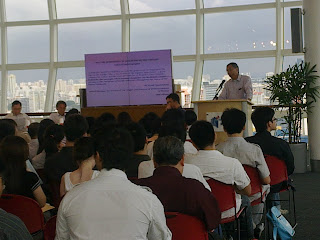 I was at the seminar organised by the National University of Singapore’s History Society (NUSHS) titled, “Singapore History; Who writes the script?”.
Although the intent of the seminar (I think) was to discuss alternate or revisionist history, besides  Associate Professor (Adjunct) Loh Kah Seng and Associate Professor (Adjunct) Kwa Chong Guan (who tried to discuss some revisionist history), the rest shared history from the perspective of the victors and not the vanquished.
The Question and Answer session at the end of the sharing session by the panelists was more interesting.  Ms Jean Marshall (the widow of Mr David Marshall), joined the panelists for the Question and Answer session.
I believe that history is a lens to look to the future and I had two questions for the panelists;

1.  Throughout history, has had periods of being open to free trade (read globalisation) which follows by periods of closed doors.  I asked if history is a cause for worry as , is so dependent on ’s globalisation in recent times and what would the implications be, if , decides to close its doors, as it had done in the past.

Ms Marshall responded to my second question first and said that she married Mr Marshall only in 1961 and that as far as she knew, the official narrative was true.
Associate Professor (Adjunct) Kwa, who was a panelist with Mr Marshall in another forum (before Mr Marshall passed away in 1995), said that he had told Associate Professor (Adjunct) Kwa then that Singapore would have probably not developed at such fast a rate, but that Singapore would have been a more just and equal society.
Associate Professor (Adjunct) Huang Jianli, who responded to my first question, said that my view of closing its doors was a pessimistic one; and that although has had periods of closed doors, it will not close its doors anytime soon now.
Associate Professor (Adjunct) Kwa, who also addressed the second question, said that closing its doors becomes less improbable when we look at from a longer time-frame.
Then, Mr Ng Teck Siong (former Chairman of Reform Party), asked the question, which was like ‘the elephant in the room’, “why was Mr Vincent Cheng not permitted to speak in the seminar?” he asked.
Mr Bernard Chen, the President of NUSHS and the moderator of the seminar replied to Mr Ng and said that he will address this question at the end of the forum in a private manner.
Mr Chen and Mr Gene Tan, the Director of National Library office, engaged Mr Ng and with him a bunch of other individuals concerned about this issue (including myself).
Ms Tan took great pains to clarify that Mr Cheng was not included in the panel of speakers because he was a late inclusion and Mr Chen agreed that the misunderstanding which arose because of Mr Cheng being not included in the panel of speakers, was all his and not that of NUSHS nor the National Library Board (NLB).
I asked Ms Tan pointedly if Mr Ng was not included in the panel of speakers because NLB received a certain ‘phone call’ or for the reason of self-censorship. Ms Tan replied, “No”, to both the questions.
She explained that when NUSHS approached NLB for sponsorship, NUSHS said that the speakers will all be academics, and when they wanted to include Mr Cheng who is a non-academic, they could not consent to it, especially when it was made at the last minute as they then would have to re-evaluate the objective of NLB agreeing to sponsor the event, and time constrains did not allow that.
I emailed Mr Cheng to inform him about NLB’s personal response to me on this issue and he wrote back to me asking whey then did they (NLB) forbid him to attend the seminar in the beginning.
“He (Mr Chen) said the woman (NLB) replied that NLB being a government statutory board had to comply with certain conditions, the issue of 1987 (alleged) Marxist Conspiracy being one. She was adamant that I should not be even present at the seminar and that Bernard should make sure that I did not attend. Bernard also told me the seminar would be put on hold”, Mr Cheng says in his email.
“When you hear all this, don’t you suspect that there is more to it then late submissions, academic qualifications and so on?” he asks.
Mr Cheng believes that NLB only changed their minds only after outrage was expressed, but only by allowing him to attend the seminar.
“I have made my stand by boycotting the event on constitutional rights grounds.  I don’t wish to fight further unless necessary”, Mr Vincent Cheng writes.
reviews