Casinos, the Internet and the sex trade 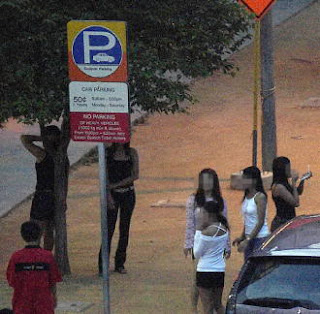 Ms Kaelbel-Sheares  is looking forward to serving the rich and famous at Marina Bay Sands (MBS) as its director of Paiza (MBS’ club for premium players) and VIP (food and beverage).

She recounted  an incident when she was the director of butler service at Las Vegas Sands’ The Venetian and The Palazzo resorts, when a hotel guest wanted to throw a party with bar service and a deejay for 40 friends – within half an hour. In such places, money is no obstacle – and money is what everyone is there for.

Anyone who has ever been to Las Vegas understands that prostitution is part of the culture in “Sin City”. Anywhere big money, like what is found in Las Vegas, is involved, those looking to make a quick buck will flock to it. This is not limited to men but also to women. .

It is highly likely that major prostitution rings which feed off the casino entertainment industry will make use of the fact that Singapore is the most wired nation in the world – with broadband penetration rate hitting 99 percent here –  to set-up highly sophisticated but  shady businesses which will thrive here.

As far back as 2001, a saleswoman in Chinatown told Agence France Presse (AFP) that every weekend she sees “China-born girls, all dressed-up, going to the KTV lounge upstairs with old uncles in their 50s and 60s”. A China-born student allegedly told AFP in the same report that Singapore men are like passports to a better life.

In 2004, there were reports of women being involved in vice activities in an effort to financially support their children’s studies in Singapore schools, with dozens being arrested in police raids at massage parlours and foot reflexology centres.

One need not be diligently seeking to find Cecilia at Singapore Model Escort, who is touted as a “beauty with a brain (and) an undergraduate student”. Her  going rate is $1000 per hour.

The ease of anonymous advertising offered by the internet will  fuel the explosion of prostitution. Posting low or no- cost ads on services like sammyboyforum and Hi5, prostitutes no longer have to walk the dark, red-lighted, back alleys.

If The Ridge’s (a National University of Singapore Students’ Union publication) report on the liberal attitude of the undergraduates towards sex is taken into account, with the trend towards promiscuity and an unquenchable thirst for materialism, the student sex trade, facilitated via the internet, should come as no surprise.

Although some students resort to selling sex because of  their personal  debts, most young people are not poor. They just want money to buy things.

Casinos will always try to sexy-up their entertainment to ensure that the gambling dollars don’t walk out of their doors.  As for the party-tourist, he expects prostitution and sits in the casino bars all day looking for it.  They will also surf the net to find women who offer such services conveniently.

It’s all a simple economic equation, demand equals supply. Someone will find a way to provide what people want. Who cares if they are mere students.