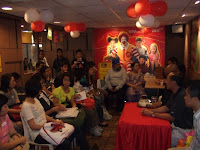 Donaldson Tan a fellow writer at The Online Citizen says: "Fellow TOC writer Ravi Philemon was mentioned by Zhaobao. Since he can't read mandarin, I think I will do some goodwill to translate the article. This is a non-verbatim translation."

YOUTH DIALOGUE WITH GEORGE YEO: COMBATING THE FINANCIAL CRISIS MAY BE PROTRACTED

The world economic outlook remains bleak in the shadow of the global economic crisis. Singaporeans have to be mentally prepared for a potentially protracted economic crisis. In view of this, Minister for Foreign Affairs George Yeo said that the Government has adopted a conservative approach. Singapore needs to focus her energies on investing in education, maintaining an open economy and constantly searching for economic opportunities.

George Yeo met 30 youths and students at a McDonald's branch along 21 Hougang Street. They discussed the impact of the economic climate on individuals and strategies on how to mitigate the impact. The discussion entailed the issue of race, foreign talent / workers, ASEAN integration and foreign policy. Although the future is uncertain, George Yeo believes that Singapore has potential.

"We are centrally located in a burgeoning Asian economy. Both India and China are experiencing large-scale infrastructure investment ... With exception to Singapore, Malaysia & Thailand, the Southeast Asian economy is also growing. We not only have an economic advantage, but also a cultural one because there is international optimism about the Singapore's prospects."

This event is an initiative of the Youth Executive Committee of the Punggol Community Centre. George Yeo is the Aljunied GRC Member of Parliament. He is also the advisor to a grassroot organisation based in Bedok Reservoir. A spokesperson of the event organiser said that this event is meant to provide a relaxed environment for youths to exchange their concerns with the Minister.

On the additional risks brought by the Singapore's open economy model, George Yeo said, "We have no choice." He also pointed out that Singapore has always been a trading centre since its inception by Sir Stamford Raffles. Trade today is 3 times the Gross National Product.

Faced with the rise of China and India, Singapore should not be closing her doors. Quoting Shakespeare, George Yeo said we have to "embark on the white-water adventure and fly courageously in on the wave" [I don't know the original Shakespeare's quote] rather than seating on the fence. "It won't be easy, but in the end, it makes our lives better," said George Yeo.

On competitive pressure exerted by foreign workers/talents on Singaporean workers, Blogger Ravi Philemon urged the Government to follow the example of Canada to legislate employers to prioritise the employment of Singaporean over non-Singaporeans.

George Yeo responded that protection of Singaporeans' jobs must be measured such that it will not lead to overall loss of Singapore's competitiveness. He also reiterated that non-native workers are not in Singapore to snatch the rice bowls of Singaporeans, but create new employment opportunities.

On the issue of racial harmony, a secondary school teacher enquired if the Government has evaluated the effectiveness of its teaching policy to eliminate racial prejudice among students. George Yeo said that racial prejudice is not only difficult to eliminate, but it also exists in all societies. In his view, racism in Singapore is not serious. On the contrary, Singapore's multi-ethnic society provided a cultural basis to engage foreign culture. This is one of Singapore's unique advantages in the global economic environment.

Several young people who participated in the dialogue felt that George Yeo only regurgitated the Government's position and that there is not much common ground. "Although the Minister is of sincere honest attitude, I do not expect any change arising from this dialogue," said Ravi Philemon.

In response, George Yeo told the reporters, "The views of the two sides are not so divergent. The problems they raised are real and their concerns are reasonable. However, we need to adopt a balanced approach to examine these issues. This dialogue is an excellent learning process. Through the dialogue, I felt the vitality of youths and learned to understand their thoughts and beliefs."
Zaobao