Vocalness – An effective tool in the battle of belief systems 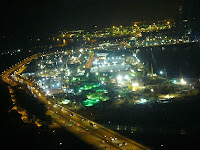 Many Singaporeans have voiced their opposition to the Integrated Resorts when the idea was first mooted by the government.

CHRISTIANS have been in the most vocal in Singapore in various issues; from the issue of casinos in the two integrated resorts to the recent controversy regarding the contents of the Comprehensive Sexuality Education.

But by being so vocal, are these Christians trying to impose their own value systems on the rest of Singaporeans? Perhaps not.

Christians generally share the same values as the majority in a multiracial, multi-religious society. But in most instances, Christians are perceived to be the most vocal group is because of their mastery of the English language as a tool to make their views known and heard.

Prime Minister Lee Hsien Loong in speaking on the opposition to the Integrated Resorts (IR) in 2004 said, “Many Singaporeans, though not all, who oppose the (integrated resorts), do so on religious grounds. The main religious groups have all made their views known. The churches, the Buddhist and Hindu groups, as well as MUIS and Muslim groups have all stated their stands. I have also received letters from many Singaporeans, especially Christians, expressing their objections on religious grounds.”

The expression used by PM Lee seems to imply that although many Singaporeans of all religious groups oppose the IR, Christians tend to voice their opposition individually in addition to doing so through their churches. Other religions, on the other hand, do so mostly through their religious institutions.

A question that begs to be answered would be: do these vocal Christians speak only for themselves or did they echo the sentiments of the majority in Singapore?

A multi-religious chorus against homosexuality

In July 2003 during an interview with Time Magazine, then Prime Minister Goh Chok Tong surprised Singapore by announcing that the government is now openly employing gays, even in sensitive jobs, despite homosexual acts remaining illegal under the Singaporean Penal Code of 377A, which drew a strong backlash from the Singaporean conservative majority.

In response to Mr Goh’s announcement, Venerable Shi Ming Yi, the then secretary-general of the Singapore Buddhist Federation was quoted as saying: “People have different likes and dislikes. Of course, as a religion, we do not think that homosexuality is right”. Venerable Shi perhaps spoke for the majority of Singaporean Buddhist when he said that.

Mr Alami Musa, president of the Islamic Religious Council of Singapore, also spoke out against homosexuality. In a recent statement on the comments by Deputy Prime Minister Wong Kan Seng on the role of religious groups in the public sphere, he said: “I am appreciative of the fact that he has re-stated the government’s unchanged position on homosexuality. That reflects the conservative nature of our society.”

His views sum up the sentiments of the Muslims in Singapore.

Hinduism has taken various positions on the issue of homosexuality, ranging from positive, to neutral, to even antagonistic. For example, the Hindu law code Manu Smriti refers to both female and male homosexuality as a punishable crime, where punishment may vary from having a ritual bath, to public humiliation, to even having the fingers of the offender’s hands cut off.

In a 2004 survey titled ‘Discussions on Dharma’ facilitated by Rajiv Malik of Hindustan Times, most swamis said they opposed the concept of a Hindu sanctified gay marriage.

The fact is, sexuality is rarely discussed openly amongst Singaporean Hindus today, and homosexuality is largely a taboo subject - especially among the strongly religious Hindus.

In fact, a 2007 ‘nationally representative’ study by Nanyang Technological University found that seven in ten Singaporeans frown on homosexuality.

And so, if Christians hold similar views as the practitioners of other religions when they speak up for certain values, it makes more sense to assume that they are speaking up not only for themselves, but also for the majority.

As a challenge to the Christians who are not shy about vocalizing for the majority, another group counter-proposes the majority view, vocalising and lobbying just as loudly for the . They are the LGBT community, as well as their proponents and sympathisers. The recently held pink-dot event is a testament to that fact.

This tussle between different values has a drawn-out history. On 3 October 2007, an online campaign was launched to repeal Section 377A, the “anti-gay” law. But on 18 October the same year, Mr Martin Tan, an entrepreneur set up Keep 377A, a counter campaign, to give citizens a channel to voice support for the Government’s retention of the law.

In just two days of its launch, the Keep 377A campaign had gained more signatures than the other website. But the fact that the LGBT even has such a loud voice can be considered a form of victory for them.

The tabling of the petition to the Parliament in support of the repeal of section 377A was an unprecedented occurrence in Singapore. Although Section 377A was not repealed then because it was deemed that Singapore was a “conservative society uncomfortable with the notion of homosexuality”, Members of Parliament like Ms. Indranee Rajah expressed hope that “Singaporean society could evolve to accept homosexuality in the future”.

The “vocalness” of this tussle between differing belief systems can only be good for Singapore; for as ideas and ideals are tossed back and forth by the opposing camps, very often, a more informed, less ignorant, stereotype-free middle ground could be forged.

Nevertheless, while suspicions, highly-charged debates and emotional confrontations are part-and-parcel of such debates, we should not allow public discourse to denigrate into name-calling or labeling.

We should avoid terms like ‘fundamentalist’, ‘militants’, ‘agenda’ when advocating for the majority or the minority. Those that engage the public or even each other for their cause should be reminded to do so in a passionate yet civil manner.

When engagement is civil, the end result will be a better Singapore.
Musings The Online Citizen