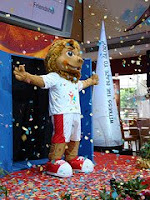 WITH ONE Filipino footballer and four members of the Hong Kong side having been infected with the Influenza A virus, and another twenty members from Philippines’ football contingent having been quarantined at the Aloha Loyang Resort since Sunday, calls have come from certain quarters to postpone the inaugural Asian Youth Games (AYG).

Is H1N1 so highly contagious that such calls are justified, or is H1N1 a low severity virus which has made some people to go into ‘panic-mode’ and overreact?

Although Health Minister Khaw Boon Wan recently announced that the coming months will be challenging for Singapore and that we need to gear up for “the community spread phase of the outbreak”, the H1N1 virus itself has so far proven to be a wimpy virus.

“What the epidemiologists are seeing now with this particular strain…is that the severity of the disease, the severity of the flu — how sick you get — is not stronger than regular seasonal flu”, said US Secretary of Homeland Security Janet Napolitano at a recent press briefing at the headquarters of the Federal Emergency Management Administration.

She added that officials are now “cautiously optimistic that this particular strain will not be more severe than a normal seasonal flu outbreak”.

The virulence of this strain of H1N1, so far seems to be well below that of routine seasonal flu. In fact, Mexican data shows that the so-called RO (or reproductive number) for H1N1 is about 1.4, which means that each person who acquires the virus infects about 1.4 other people.

When compared to the dreaded 1918 influenza pandemic which had an RO of around 3, the current ‘pandemic’ is certainly not a terrifying contagion at all.

Even the World Health Organisation (WHO) which officially declared the outbreak to be a pandemic on June 11 stressed that the new designation was a result of the global spread of the virus and not indicative its severity.

The case fatality rate (CFR) of this ‘pandemic’ strain is estimated at 0.4%, whereas the Severe Acute Respiratory Syndrome (SARS) had a CFR estimate of between 14 and 15 percent.

Dr Anne Schuchat, the US Centers for Disease Control and Prevention’s interim deputy director for science and public health program, said that even the best estimates suggest “that the fatality [rate] is likely a little bit higher than seasonal influenza, but not necessarily substantially higher”.

While very little is known about the medical conditions of those that died in Mexico after contracting H1N1, evidence from those hospitalised in the US after being infected with H1N1 suggests that almost all of those cases had complications from other chronic illness or conditions.

The Ministry of Health in this instance seems to have done more than is sufficiently necessary to counter the “threat” of this low-severity virus. Such a low-risk infection surely only demands common sense precautions of hygiene, like washing the hands thoroughly and regularly with soap and water and turning away from a person and covering your nose and mouth with tissue paper when you have to cough or sneeze, and so on.

Drastic measures such as those implemented during the SARS crisis and calls to call off or even postpone the AYG are absolutely “knee-jerk” reactions will be totally unjustified.

The AYG will allow our youth players to use this chance to benchmark their performances against other youth teams from Asian nations. The Games will also provide Singapore with an opportunity to test organisational and logistical capabilities in advance of the 2010 Summer Youth Olympics, which Singapore will be hosting.

The uninterrupted hosting of such an event means more than bringing in much needed tourism dollars in this economic downturn; it also means giving our youngsportsmen and sportswomen in Singapore a much needed opportunity to gauge themselves against the best in Asia, and in so doing prepare themselves to do us all proud in the 2010 Summer Youth Olympics.

The words of Datuk Dr. Jegathesan, chairman of the Olympic Council of Asia’s medical committee ring true. He said: “the precautionary measures taken by the organisers [of the Asian Youth Games] are quite convincing”, as there are certainly no serious indications that there is a need to cancel or postpone the games.

The H1N1 or some other ‘flu’ will always continue to shadow a global and cosmopolitan city like Singapore. While it is always good to have an excellent business continuity plan, we cannot be held hostage by such “crisis”. While targeted control measures are taken to contain such crisises, life must continue as normally as possible.
Musings The Online Citizen