In her article, Ambiguous Legacy of 1959, Ms. Chua Mui Hoong tries to argue that 1959 is indeed an unambiguous year as it was the year where Singapore emerged from being a poor self-governing state, to the prosperous, confident metropolis of today; because "it was in that year that Singapore became a state of its own, with the right to confer citizenship". Ms. Chua needs to get her facts right.

The 'Singapore citizen', who was still a British subject, ceased to exist on 16 September 1963 because on that day he became Malaysian citizen; upon Singapore's merger with the Federation of Malaysia. Malaysian citizenship was of course governed by Malaysian nationality law.

Upon Singapore's secession from the Federation of Malaysia on 9 August 1965, a new Constitution came into effect, which repealed the Singapore Citizenship Ordinance of 1957 and granted proper Singaporean citizenship to all persons who were citizens as of 16 September 1963 by virtue of the Ordinance.

If any year besides 1965, were to be remembered, the year 1955 should be the most apt as it was on this day that the British government allowed Singapore to hold its first general election which was won by a David Marshall, the pro-independence candidate.

Lim Yew Hock suppressed the communist movements including the pro-communist union leaders in the People's Action Party. Lim Yew Hock also led an all-party delegation to negiotate with the British in a series of Merdeka talks from 1956 to 1958 and it was his policies that convinced the British that Singapore was ready for self-rule and she was granted full internal self-government with its own prime minister and Cabinet overseeing all matters of government except defence and foreign affairs.

Lim's tough measures which managed to convince the British though alienated a large portion of the Chinese-speaking electorate and the transfer of Christmas Island to Australia in 1957, also made him hugely unpopular. These factors enabled the PAP to win the 1959 general election and form the new government of Singapore. 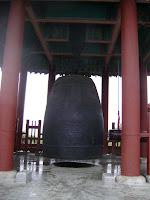 Whatever twists or turns Ms. Chua makes, 1959 is not the year "first Singaporean citizen" was born. The constant trumpeting of '1959' is sounding more like a case of noisy gong, then a case for bringing out the cymbals. Ever heard the saying, "empty vessels makes the most noise"?
Musings