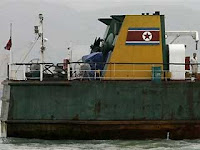 The USS John McCain, a Navy destroyer, is positioning itself in case it gets orders to intercept the ship Kang Nam as soon as it leaves the vicinity off the coast of China. Military sources told FOX News that, ""This is a very delicate situation and no one is interested in precipitating a confrontation."

The ship which is suspected of carrying weaponry, missile parts or nuclear material, appears headed towards Singapore and from Singapore to Myanmar.

Without referring directly to the movement of Kang Nam or its suspected cargo, a spokesman of the Ministry of Foreign Affairs said,"Singapore takes seriously the proliferation of weapons of mass destruction, their means of delivery and related materials."

According to the military sources that spoke with FOX News, Kang Nam is "a repeat offender", which has been involved in proliferation activities in the past. Apparently the ship has been detained in Hong Kong before, in 2006.

With the present government of Singapore being a strong ally of the ruling junta of Myanmar. was the North Korean ship trying to evade suspicion, by trying to transition through the ports of Singapore?

Since this is not the first time Kang Nam has been involved in activities of proliferation, the government of Singapore should come clean as to how many times before has the same ship passed through its ports en route to Myanmar. As Singapore is a participant in the U.S.-led Proliferation Security Initiative (PSI), a multilateral coalition for suitable interceptions and inspections of ships suspected of carrying any type of cargo related to nuclear weapons and ballistic missiles; and because of the known fact that North Korea does not export anything other than weapons, this voluntary revealing of the records by the Port of Singapore Authorities, will be especially important.

North Korea has said that any attempt to board its ships would be viewed as an act of war and promised "100- or 1,000-fold" retaliation if provoked. It would indeed be sad if Singapore has unwittingly played itself into the hands of rogue states like North Korea and Myanmar.
Foreign Affairs Musings

Anonymous said…
I'm not sure if "strong ally of the ruling junta" appropriately describes our institutionally-constrained relations with Burma. My point is that we are unable to be in a position of neutrality on issues involving the US and the "failed states" in East Asia, and will continue to be pressured both as an individual state and collectively through ASEAN.

I have a hunch that this episode will come to pass rather quietly, and the Kang Nam would head to Burma without docking here, although I am again unsure how the US presence in Singapore would deter potential DPRK's belligerence should the Kang Nam be inspected in Singpore.

I certainly hope MPA would be fully transparent on this matter.