Getting Their Hands Dirty - An Allusion or Elusion 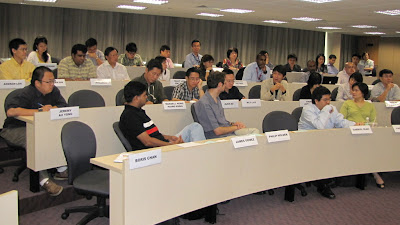 I participated in a Seminar organised by the Institute of Policy Studies, titled "Getting Their Hands Ready: Recent Developments in Singapore Political Blogosphere" yesterday.

During the presentation, Tan Tarn How one of the presenters said that one of the limitations of the blogs is the perceived confidence of Singaporeans in the main stream media. And he cited a Gallup Poll finding to substantiate this claim. One of the main-stream media, The Straits Times today has made full use of this remark by Tarn How; and in an article published today titled "Blogs' reach limited: Study", with the subtitle "Mainstream media is still key source of news", made allusions to this. What I cannot determine though is if the 'study' alluded to in the article header, is an allusion or an elusion.
During the discussion at the seminar, I asked Tarn How when were the polls taken. Tarn How admitted that it was in the year 2005/2006. So, the polls were taken at at least 4 to 3 years ago in the "pre-The Online Citizen" era and in the age where the concept of web 2.0 was still relatively new, continuing to be developed , with "infant-stage" users.

With further questions from me, Tarn How remarked that there was a "dire need for alternatives", but the perception of the public was that the main-stream media was mostly reliable except when reporting or commenting of socio/political issues, where it is usually read "with a pinch of salt", meaning they exaggerate and distort things, so what they say shouldn't be believed unquestioningly.

The Gallup Poll is dated and even the dated Gallup polls in all probability did not measure the confidence level of Singaporeans when it came to reporting/commenting on socio/political issues; and so it should not even have been cited to substantiate the 'study'. Unless the real intent is to create an elusion.