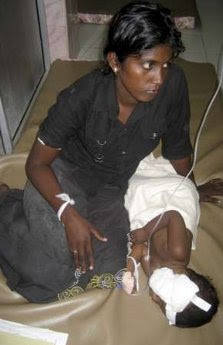 The civil war in Sri Lanka is one of the world's deadliest ongoing armed conflicts, causing significant harm to civilian population, environment and severe damage to the economy of the country. Now 25 years running, it has claimed at least 215,000 lives and displaced more than 1.5 million people. The possibility of a lasting peace was raised when a cease-fire agreement was signed with international mediation in 2002. However on January 2, 2008 the Government of Sri Lanka formally announced unilateral withdrawal from the ceasefire agreement and since the conflict has escalated to critical levels in the recent months.

Donor countries such as the United States, Canada, Norway and Japan have shown deep regrets on this decision by the Government of Sri Lanka. On September 9, 2008, the Government of Sri Lanka ordered all international and local aid agencies to leave the northern areas of conflict and take their equipment with them. UN agencies and international relief organizations including Oxfam, "Save The Children" and the Danish Refugee Council that have been delivering food and medical aid to nearly 200,000 refugees in the affected region started to pull out.

Join me at the Tamil Methodist Church Ang Mo Kio St.21, Singapore on Friday from 8pm onwards to light a candle vigil (prayers for people affected by the war in Sri Lanka) and show your support for peace in Sri Lanka.

ALL ARE INVITED TO ATTEND
event support social activist