September 30, 2008
I met this man when I was a young man, just out of the army and searching for a job.  I took the MRT to go for an interview  and there was this man boarding the train at City Hall. He smiled at those who acknowledged him and had a very pleasant aura.  I was pleasantly surprised! Was this "The Tiger" of the parliament? I was too shy and too conscious of myself to even say "hello" to this man. 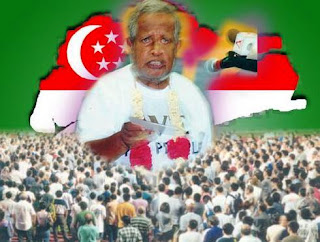 As I grew in years and matured, I began to admire this man for his "never say die" attitude and for his fighting spirit.  I admired him for standing up against the propoganda that, "nothing is free in this world", that "there is no free lunch, no handouts, no subsidies".  For highlighting the widening gap between the "haves" and the "have-nots" in Singapore and for advocating the government to lessen the inequalities between the rich and low-incomed Singaporean.

J B Jeyaretnam was a man who besides his setbacks, truly believed in the everyday Singaporean.  His rallying call was often that "power does not belong to the government. It belongs to the people. They delegate it to the government." He identified himself with the common Singaporean through the slogan "We the People".  Now, the thought lingers in my mind, "was this true son of the people of Singapore, betrayed by the very people he loved so much?"
J B Jeyaretnam Tribute

Kojakbt said…
The opposition has lost a determined fighter. My condolence and sympathy…. However, I’m sure JBJ in heaven would not want us to stop fighting the PAP. Let’s continue JBJ’s fight to stop the dominance of 1-party politics in Singapore. Let’s strive to bring true democracy to Singapore by encouraging Singaporeans to vote for pluralism in our politics. Feel free to join me to continue the fight at http://forums.delphiforums.com/3in1kopitiam/messages
October 2, 2008 at 12:47 AM