Halimah Yacob, Elected Presidency, and the people's desire for checks and balances 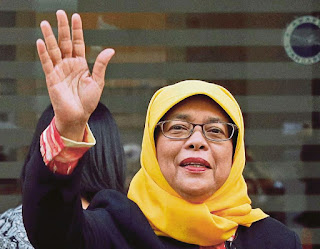 Here are my thoughts on Halimah Yacob, Elected Presidency, and the people's desire for checks and balances.
I don't doubt that she is her own, independent woman. No one can rise to positions of leadership if they do not exhibit individuality and streaks of independence.
Where she fails, and fails miserably, is in the critical area of ideological conformity.
Regardless of the message pressed home by the PAP Government that the Elected Presidency is not a system of checks and balances on the Government - that is what the people think it is. As long as the Government maintains the system of Elected Presidency, it is not wrong for the people to have that perception. They rightly feel angry that their voices were suppressed by the Government in PE2017.
Dr Tan Cheng Bock has suggested that when the people next have a chance to vote, it will be 'thunderous'. I beg to differ from this view.
Mr Chan Chun Sing rightly pointed out at the recent IPS Forum that regardless of what you think of the caliber of the current crop of PAP leaders, they are not stupid.
The next election is at least two years away. And two years is a long time to sustain such an anger. When the time comes to vote, despite feeling angry over the denial in PE2017, many will think about the value of their HDB flats, their obligations to grassroots leaders, their fear of change, etc, and vote for the PAP Government overwhelmingly again.
Think 6.9million population white paper and the 2015 General Election.
I however will be happy to be proven wrong.