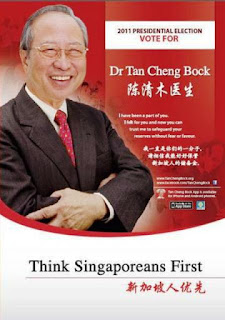 The Report by the Constitutional Commission to review the Elected Presidency was released by the Government earlier today. By all accounts, it is a very comprehensive report which had considered the submissions and views of several different people and organisations.
After reading the Report, what stood out for me was the Commission’s determination to clearly demarcate Constitutional and Political ambits of the Elected Presidency.
For example, the Commission reported that “one pair of contributors submitted that after the experience of the last 25 years, the Elected Presidency should be abolished and Singapore should return to a system where the President is appointed by Parliament.” The Commission noted that this submission is “a matter that falls clearly beyond the Terms of Reference (of the Commission). The choice of constitutional design and arrangements to achieve particular ends are quintessentially political questions. They should be left to the Legislature or, in extreme circumstances, the electorate voting in a referendum.”
Throughout the Report there are several such references which clearly specify that the Office of the Elected President is as much a political construct, as it is a constitutional one.
The Report, for instance, referred to some contributors suggestion to defer “the implementation of any proposed changes to the qualification criteria so as to prevent candidates who might previously have qualified to contest the Presidential office from being excluded from contesting the 2017 Presidential elections.” I was one of the contributors who made that submission.
The Commission said that “the question of whether and when any amendments should be introduced is a political matter for Parliament to determine.”
If the Constitutional Commission’s proposals are accepted and passed as legislation by Parliament, it will mean that Dr Tan Cheng Bock who had previously qualified for the Presidential Election will now not qualify for several reasons.
For one, the commission recommended increasing the S$100 million paid-up capital threshold to S$500 million in shareholders’ equity, in absolute terms. According to Law Prof Eugene Tan, Dr Tan Cheng Bock fulfilled the elected presidency criteria in 2011 because he was the Chairman of Chuan Hup Holdings for 20 years. Prof Tan calculated that the paid-up capital of Chuan Hup was about $177 million when Dr Tan retired in 2011, exceeding the $100 million minimum.
Another reason why Dr Tan could be disqualified is because of the Commission’s proposal that “when a member from any racial group has not occupied the President’s office for 5 continuous terms, the next Presidential elections should be reserved for candidates from that group.”
Singapore has not had a Malay President for six terms, since Yusof Ishak. And has not had one from the Eurasian community since President Benjamin Sheares.
Some contributors like me had suggested to the Commission that in the event the Commission decides on changing the existing criteria of qualifications for the Elected President, it should include a ‘grandfather clause’ in the changes which would allow the candidates who qualified to contest in the 2011 Presidential Election to do so in the next Presidential Election.
The Commission has decided that such a decision should be a political one for Parliament to determine. And the People’s Action Party has a super-majority in the House to advance its political agenda.
—
Read the full report here: http://bit.ly/2cs9O1a.