Feedback to Committee of Inquiry into Little India Riot

February 07, 2014
I sent the following feedback to the Committee of Inquiry into Little India Riot. Hope it was useful. 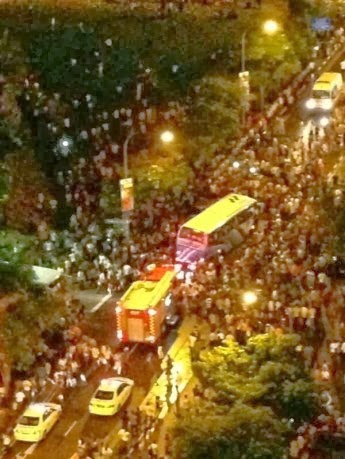 Although I did not witness the Little India Riot first hand, I was at the recent fracas in Rex cinemas at Mackenzie Road where reportedly a crowd of more than 100 people, mostly foreign workers, refused to leave the cinema after the theatre cancelled the premiere of a Tamil movie.

I witnessed first-hand how the police officers who turned up for crowd control had difficulties communicating with the disgruntled moviegoers. One police officer I observed, used the word 'Dei', possibly in an attempt to establish camaraderie with the crowd. But in Tamil, the term 'Dei' is only used on people who are younger and/or are familiar (e.g. younger brother, close friends, etc), and is never used on people who are older and strangers as it is considered disrespectful. It was quite evident to me that the crowd's inability to express their grievances clearly to the police officers, as well as the officers limited language ability prevented them from communicating effectively to one another. Because of this, at one point I also had to interpret for the police officers, and convey the wishes of the moviegoers to the police as well.

Throughout the time I witnessed the police trying to resolve the dispute between the movie-going crowd and the cinema operators, I casually observed that there was only one police officer with an Indian name, but he did not speak much, and if he did, it was certainly not in Tamil. Things could have gone out of hand that night if not for cool heads, both the police officers on the ground and the moviegoers, who decided to seek extra help in understanding one another. Kudos to the police officers for that.

Little India is a very unique place. It is the only place where tens of thousands of foreign workers, workers who probably speak very little English, congregate on weekends. I acknowledge that it might be impossible for all first-responders to be effective communicators in another language that might be foreign to them. But Tamil is one of our official languages.

Were sufficient Tamil speaking first-responders deployed for crowd control on the night of 8 December 2013 at Little India? If they were, what is that number? How effective (or ineffective) were they on that night?

Are officers who are able to speak our official languages, well represented in the Singapore Police Force and the Singapore Civil Defence Force, so that they can better communicate to the crowd in similar emergencies?

Besides Little India, there are other areas where foreign workers congregate on the weekends, could trained interpreters be recruited to be deployed at emergency situations which may require a particular language ability in order to avert a damaging situation?

I hope my feedback has been useful to the Committee. Please do not hesitate to contact me for any clarification.