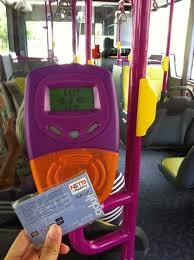 "From 2006 to 2013...in the last seven years do you know how much our transport fares
have increased? 0.3%. It has almost remained the same. Even though it increased for some years, during the 2008 financial crisis, it was reduced. In the past year, there was no change in the fare." - Minister without Portfolio, Mr S Iswaran in aTamil programme in Vasantham (http://video.xin.msn.com/watch/video/episode-10/2b1whkfhz)

1995 : BUS FARE REVISION
§    Extension of the maximum bus fare by another fare stage (over 18.4 km) to $1.10 and $1.40 for non air-con and air-con services respectively (equivalent to a 10 cents increase).
§    5 cents increase in feeder fares and industrial fares to 30 cents and 45 cents respectively, with the corresponding introduction of a 5 cents transfer rebate for feeder buses.
§    $2 increase in concession stamps prices for tertiary students, NS men and SBS shareholders.

2003: NEW FARES FOR NORTH EAST LINE (NEL)
§    Differentiated fares for the NEL at 5 cents to 25 cents higher than the existing RTS fares, or an average of 16.5 cents more.
§    Fares for child/student/NS men concessions remained the same as that for the existing RTS lines.