Singapore's not soulless - it's in our food 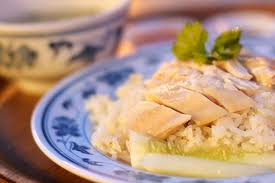 Last year at about this time I had said,"some would say it is the food that binds us - I'd say that although the food's good, if that's the only thing that binds us, then that is very superficial". Now, I feel a little differently about local food.

I remember the time when I was a little boy and lived in a 2-room flat in Tanglin Halt Road. I would wait for the almost melodious call of a boy not much older than me, "Goreng Pisang...Epok Epok!" I didn't know his name, but often greeted him "Hello Goreng Pisang", and I especially enjoyed his fried bananas and curry puffs.

When I was living in Tanglin Halt, my mother's elder sister, my aunty, lived in the HDB block next to mine. Whenever my mother was working the afternoon shift, my aunty would visit us to ensure that my sisters and I were ok. I remember wishing that she would visit us in the early evening, because there was a "Mee Rebus Man" who would sell his noodles on his bicycle on the walkway between our blocks, and my aunty always stopped to buy a packet of mee rebus for us three children to share during tea-time if he was there. A packet of mee rebus cost only 50-cents and I often salivated just watching my aunty buying the mee rebus from a little window in the kitchen.

At that period of time in my life, my mother went to the Tanglin Halt market on almost every Saturday. And whenever she went marketing, she would always buy back fish-ball mee or apam balik for breakfast.

I also vividly remember the night I was introduced to Hokkien Mee. It was the year when we had our first telephone. My mother called home from a public phone to say that she was not cooking, and asked what we wanted for dinner. I said mee goreng, but my mother came back home with hokkien mee. I was quite upset, and even told my mother that I won't eat it. My mother tried to pacify me saying that the mee goreng stall was closed, and that what she had bought was the Chinese mee goreng. I only tried it when she promised to get me something else if I took a mouthful but didn't like it.

I was hooked at the first mouthful.

When I was in Primary 6, after remedial classes, my teacher asked me if I would buy her chicken rice from the Tanglin Halt market. Of course I would. I loved chicken rice. Just as I was about to rush off, she reminded me to get the chicken rice from a halal stall. What's halal? That day, I was introduced to another variety of chicken rice - which I thoroughly enjoyed as well.

When I was in secondary school, I often walked to the food centre at Margaret Drive with my friends to enjoy a plate of chicken rice; or to the coffee-shop in Holland Road for roti-prata. I still remember how we three friends ordered the roti-pratas, "ரெண்டு, ரெண்டு, ரெண்டு. பிச்சி, பிச்சி, பிச்சி   கரி மேல ஊத்தி" (two prata, shredded with curry on it).

When I came back from the USA after having lived there for a few years, in 2008, on the very first evening of my return, I drove to a hawker stall in Chinatown to have a plate of char kway teow. That was what I missed the most.

It was also food which made me realise that I had perhaps come back to a very different Singapore. One morning soon after I came back from the USA, I went to the neighbourhood coffee-shop to have one of my favourites for breakfast - economical fried noodles. After having sat down with the food, I tried to order myself a drink of soya bean milk. (I think the love for soya bean milk is very local. I have tried introducing this drink to some of my friends from overseas, and most felt that it was very bland and did not like it.) Unfortunately, the person taking my order could not take my order even when I tried ordering in Hokkien saying, "tau huay chwee" while gesturing at the same time. The person taking the order was a foreigner and I could not speak Mandarin.

Just as I had grown fond of food which should not be 'mine' (ethnically speaking), I suspect many Singaporeans too have not only grown fond, but have also adopted what was not originally theirs, as their own. That was why I believe 'Cook and Share a Pot of Curry Day' was supported by so many Singaporeans in 2011.

Local food is surely the soul of our young nation. Which is why a lot of people found "mee siam mai hum" very amusing. Which is why a good number feel that it may not be such a bad idea to have a 'rojak government'. It could also be the reason for the wild success of Alfian Sa'at's 'Cook a Pot of Curry'.

If some people have given up on Singapore, or don't want to come back to Singapore because it has lost its soul, then there can be nothing like the laksa and chicken rice to convince them otherwise.