Singapore Government can do more to tackle haze 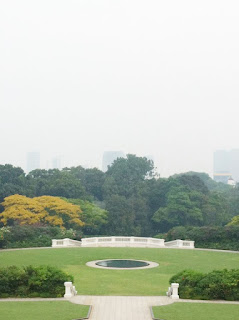 The PSI stood at an unhealthy 155 at 10 pm last night. The Minister of Environment and Water Resources has now conveyed his deep distress about the haze - the worst in seven years - to his Indonesian counterpart. The Minister for Foreign Affairs, K Shanmugam, has also registered Singapore's concerns about the worsening haze situation to the Indonesian Foreign Affairs Minister.

In offering the Singapore government's assistance, the Minister for  Environment and Water Resources suggested that the Indonesians name the companies responsible for the fires. The Minister, Dr Vivian Balakrishnan, said that he was waiting for Indonesia to publish the concession maps, for with these maps, in combination with satellite photos, the errant companies would be better pin-pointed. In his Facebook post, Dr Vivian insinuated commercial boycott of such errant companies.

Haze is not a new problem. Year-after-year, the Singapore government has complained to the Indonesian authorities about this environmental  predicament. Complaining to Indonesia will only do that much especially since Indonesia has not even ratified the ASEAN Agreement of Transboundary Haze Pollution - a regional arrangement that binds a group of contiguous states to tackle transboundary haze pollution resulting from land and forest fire.

What's new is that this is probably the first time a Cabinet Minister of Singapore has hinted at a boycott of products that come from the companies responsible for these forest fires.

This suggestion of a boycott comes at a time when the Indonesian Forestry Ministry official  commented that the governments of Singapore and Malaysia has to take some responsibility for the haze, saying these governments should  "tell their investors to adopt proper measures so we can solve this problem together."
MP for Tampines GRC weighing in on this comment by the Indonesian ministry official said:

"Indonesia is being quite disingenuous to try shift the blame for the haze to other countries like Singapore and Malaysia. It is up to Indonesia to prosecute commercial companies, regardless of ownership, which cause transboundary haze pollution. All ASEAN countries, including Indonesia, already have domestic legislation which prohibits the use of fire for forest clearance in their own countries. The local authorities must enforce it. There are currently no legal sanctions which Singapore can apply against plantation companies whose extra-territorial actions affect our local environment.
What Singaporeans can do is to apply commercial pressure by boycotting products that come from these companies in Indonesia responsible for the land and forest fires, and to demand for products that come from sustainable sources. It should not matter the ownership of the companies. Then perhaps Indonesia will learn that we mean business."
The shift of blame to irresponsible corporations by the Singapore government is also relatively new. In the past, small farmers were blamed for the forest fires. But the work of Indonesian environmental groups like Wahli, which have pointed out that it is large palm oil plantations that are the main culprits in clearing land by burning, to minimise costs of heavy equipment and hiring enough workers, have made it that much difficult for small farmers to be blamed.

The fact is, Indonesian laws allow companies to use fires to clear land if they get a permit; and with corruption, collusion and problems with law enforcement, the burning of crops to clear land in the dry season is here to stay with us for a long time.

Prime Minister Lee Hsien Loong too has now commented on the haze. In posting a picture of the hazy situation from Istana, he has said that its quite unfortunate that "the winds are blowing the smoke all the way to Singapore".

But instead of wishing for the wind gods to unleash the winds in our favour, instead of calling for consumers to boycott products of companies responsible for this haze without providing a list of products and brands to avoid, instead of just conveying deep distress to the Indonesian government, there must surely be something more our Singapore government can do.

Singapore has had its own Haze Task Force headed by the National Environment Agency's Director-General for Environmental Protection since 2005. The tasks of this task force is to develop a National Haze Action Plan, and to formulate strategies to help ameliorate the impacts of haze on the population.[i] Singapore is now experiencing the worst haze in seven years, but the populace is unaware if there is National Haze Action Plan, and if there is one, what are the tactics of this plan to alleviate the impact of haze on the general public.

There's speculation that some plantation companies who may be benefitting from this slashing and burning of forests–directly or not–are domiciled in Singapore. One of this companies, CTP Holdings, is partly owned by Temasek Holdings, an investment company wholly owned by the Singapore government; and the other is Wilmar International, which has the current non-resident Ambassador and former Member of Parliament for 22 years, Mr Leong Horn Kee, on its Board of Directors.

An academic report has alleged that Singapore plantation companies are known to have several important current and former Indonesian government officials and other prominent individuals ‘on the payroll’, and having such patrons, managed to escape investigation and conviction of open burning allegations.[ii]

If this is true, then it is about time Singapore considers legislating a foreign corrupt practices act, which will, among other provisions, make it unlawful for a Singapore citizens and Singapore-registered businesses to be engaged in corrupt practices even when they are not within Singapore's jurisdiction, and so, become liable for legal and enforcement actions.