MDA should not have unfettered power to act against citizens 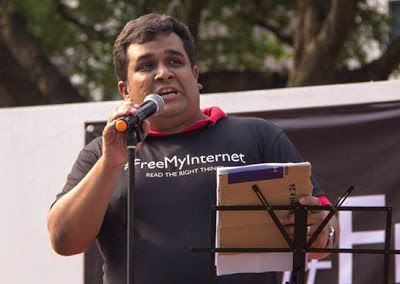 I think we have to be fair to this PAP government. So, to be fair, let us look at the reason why they say this regulation is needed. MDA has said that they want to bring the online news sites to be on par with the traditional media. We have asked if you want parity, why don't you free up the traditional media?

No, no they have said. We are ranked at 149th in world press freedom ranking.  They probably have to ensure that we stay right there in the high hundreds, with countries like Afghanistan and Iraq.  Anyway, Minister for Information and Communications, Dr Yaacob Ibrahim, has actually pointed us to New Zealand to say why deregulating the traditional media is not a real option. Never mind that New Zealand is at #8 at world press freedom ranking. And also never mind the fact that New Zealand laws does not actually compel any websites, or blogs to be subjected to regulation.

MDA has also  said  that these new regulations have been introduced because it feels that more clarity should be given where Singapore news programme is concerned because their content is used by others to make informed decisions, or to form judgement on matters of national interest.

Sounds fair enough right?  But then they go on and define what all are considered to be Singapore news programme. And according to MDA:

"A “Singapore news programme” is any programme (whether or not the programme is presenter-based and whether or not the programme is provided by a third party) containing any news, intelligence, report of occurrence, or any matter of public interest, about any social, economic, political, cultural, artistic, sporting, scientific or any other aspect of Singapore in any language (whether paid or free and whether at regular interval or otherwise) but does not include any programme produced by or on behalf of the Government."

Like that anything can be a news programme right? People sit on the floor in the crowded MRT, someone shits outside the MRT station...also can be Singapore news programme. I think that is why the MDA included STOMP. Remember the STOMP report about , Train leaving MRT station with one set of doors open?

And who has this unfettered power to declare someone an online news site? MDA. Not an independent body. And MDA because they are a regulatory body made up civil servants, they won't further the interest of a certain political party right?

Before you answer yes or no, let's remember that in July 2010 Martyn See received a notification from MDA that a video he recorded containing Dr Lim Hock Siew's speech at a book launch is banned. Dr Lim a medical practitioner was a political prisoner in Singapore for 20 years. MDA said that Martyn's video gives “a distorted and misleading portrayal” of past events.

A regulatory body of civil servants are not capable of siding with a certain political party right? That's why the Aljunied-Hougang-Punggol East Town Council is now accusing the National Environment Agency of being politically motivated to tarnish the image of that Town Council.

There's is absolutely no political motivation. That's what the PAP government wants us to believe. Which is why besides the sites owned by Mediacorp, which by the way, is wholly owned by Temasek Holdings, and SPH, where the PAP appoints its own monitors to ensure that its papers say the right things, the only other site affected now by this regulation is Yahoo! - an international site which the PAP government has got no control over.

The PAP has always been afraid of the foreign media. In 2001, in passing law that allows punishment of foreign news broadcasters deemed to be "engaging in the domestic politics of Singapore", the then Information Minister said that the PAP government needed to ensure that  foreign broadcasters don't "stray" or "try to be funny" in reporting Singapore developments. Singapore's politics are "for ourselves, alone to decide, not for foreigners to come in and tell us what to do".

The funny thing is, they never defined what engaging in domestic politics of Singapore meant.

And no, the protest today is not for Yahoo! a foreign media company. We know that Yahoo! is a big company which probably can afford the $50,000 that this new regulation demands.

This protest is for us. Because this new regulation gives the government so much power to arbitrarily decide, nobody knows what kind of 'traffic monitoring tools and perception-based surveys' - maybe not even god knows, what these tools are - which site is a online news site and which is not.

TOC has already said that they have more than 50000 unique visitors a month and they write more than one article per week on Singapore’s news and current affairs over a period of two months.  I am sure that TRE more than meets these numbers as well.

And Tan Chuan-Jin who sat in for the Information Minister at Talking Point recently said that if a blog aims to report news regularly, then it can be considered a news site.

This is very worrying for Singapore. Because once you are gauged to be a news site, you will have to even moderate your readers' comments properly, if not, you stand to lose your $50,000.

The government wants us to trust them that they will not misuse this power. But when they have chosen not to trust us, why should we them?

This is a government which has not ruled out a nuclear power plant for Singapore.

This is a government which has not said in clear terms that we will not have 7 million people in Singapore in 2030.

Should we trust them?

I think Singaporeans don't mind if the mother of MDA's CEO gives her daughter an option to purchase a 10 million dollar condo. After all, $10 million can be quite cheap to some hardworking people.

But MDA should take its hands off the online world.

Because, the online world is the most open 'public square' Singaporeans have right now, and this new regulation gives MDA unlimited power to act arbitrarily against the interest of Singaporeans.

I believe I speak for the majority of Singaporeans - and I say rescind the gazetting requiring online news sites to be gazetted.

My speech in English: