February 17, 2013
I spoke at the historic rally 'Say "No" to an overpopulated Singapore' last evening. I spoke from my heart and without any scripts. As such, I do not have the transcript of my speech. I post here the essence of my speech yesterday. 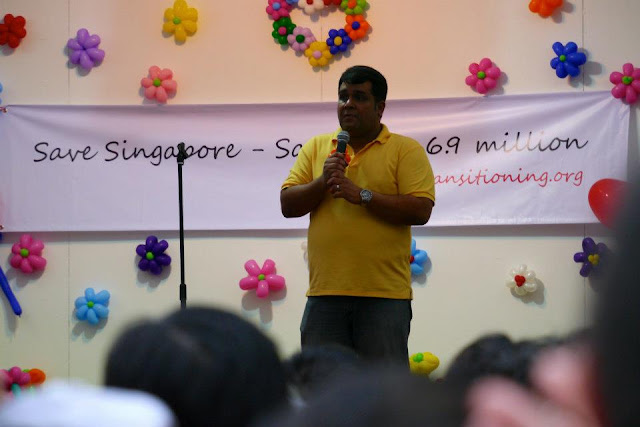 At the rally yesterday, I thanked Gilbert Goh of transitioning.org for apologising for posting an article on racial profiling, which could fuel xenophobia at the event. I said that I lived as a foreigner in an alien land, and so can relate to people who come to Singapore to find a better future for themselves and their families. While we cannot, and should not fault the immigrants for wanting to come to Singapore, we must and should fault the immigration policies of the PAP Government. I mentioned that yes, Gilbert made an error of judgement in posting that article, but when compared to the errors of the White Paper, it was more forgivable.

Forgivable because Gilbert's website has a reach of at most a few thousand people, whereas the White Paper reached millions of people. Gilbert also did not make errors like calling nurses 'low-skilled', for which an apology had to be extended later - and also Gilbert did not make the error of calling the White Paper a policy, only to amend it later to say that it was planning for 'worst case scenario'.

I said at the rally yesterday that we don't have a stupid government, who would build infrastructure for 6.9 million people but not bring in that number. Because that will cause a huge upheaval in our property market where a lot of Singaporeans wealth are tied-in to. The private transport operators too would not want to run a loss making expanded transport network. So, when you build the infrastructure for 6.9 million, you'll have to bring in 6.9 million.

I drew from my previous article to say that from the years 1990 - 2000, and from the years 2000 - 2010, our population grew by between 900,000 - 1,000,000 per decade mainly through immigration. If we go by the population projections of the White Paper, it would mean that there would be no let-up and that we will continue to grow the population by almost a million people every decade mainly through immigration for the next 2 decades, until 2030. I asked if that was sustainable. And even if it was sustainable, do we need such kind of population growth?

I said that if we kept growing the population at such rates, it would mean that there would be more than 8.5 million people in Singapore in the year 2050. I said that I would probably be still alive in 2050, but will be a very old man - and that that is nor the Singapore I want.

I said that as a Singaporean, as a community worker who works among the disadvantaged, and as a parent of two teenage children, I was concerned about the White Paper.

As a Singaporean because the influx of foreigners would mean that the Singapore core would be affected. How can the citizens of Singapore be a minority in their own country? That sometimes when I mention my name, people think that I am a new citizen. That recently when I had posted something on the White Paper on my Facebook, someone had commented that what I had said made sense, but that I was only a 'new kid on the block'. I highlighted that I was not a 'new kid on the block', and that I was a 4th generation Singaporean. My children are 5th generation Singaporeans, and that we are proud of that fact.

I was concerned as a community worker because I see first hand how the PAP Government's 'cheaper, better, faster' policy has not only disadvantaged all workers (local and foreign), but has also depressed wages for the low-income Singaporeans, as well as for the professionals, managers, executives and technicians in the middle income tiers.

I said that I was concerned as a parent because evidence suggest that there is a correlation between overpopulation and falling fertility levels, and that my children may decide not to have children of their own, only to raise them in an overpopulated, more dense, more stressful Singapore - which will mean that there will be no 6th generation of Singaporean Philemons. It could also mean that my children may choose to migrate to a less populated country with a better quality of life to raise their own children - which will mean that I have to die alone in this country that I love very much - SINGAPORE.