Opposition has more integrity than PAP

I refer to the newspaper report 'PAP explains software sale to AIM' (link: http://goo.gl/6VMO9). The report states that 'The PAP declined to comment on the number of companies it owns'.

The PAP being a political party is subjected to the political donations act; an act which the PAP dominated Parliament passed as being integral in safeguarding the integrity of the domestic political process, and to ensure that political organisations are not funded by foreign elements or sources.

Since the Party is subjected to the said Act, it is important for the Party to give details of the companies the Party own, for only that will give the general public the confidence that the ruling party is not above the integrity expected of other organisations involved in the local political process, and that it is not funded by foreign elements or sources.

I write to you as Party Chairman to shed more light on this issue.

AIM (PAP-owned company) too, like its owner, has declined to give details of its track record and business dealings. This silence, is extremely disturbing, and I hope I get a response from PAP's chairman soon. 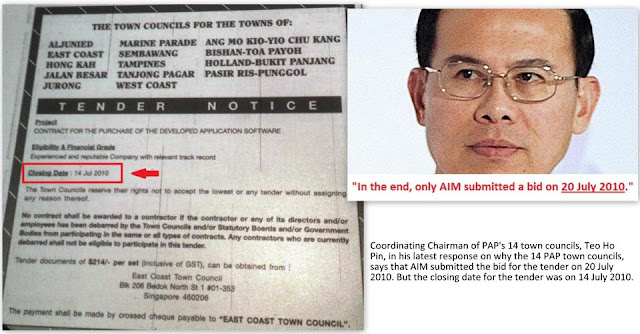 In the midst of the unraveling of this issue, some have accused Workers' Party of keeping relative silence because they too like the PAP, have engaged their own company to manage the Aljunied-Hougang Town Council. That accusation is not true.

While the PAP has acknowledged that AIM is owned by PAP, FM Solution & Services Pte Ltd (FMSS) is not owned by WP, and also no WP member has any interest in FMSS (see THIS). Yes, the General Manager of FMSS may have formerly been the secretary of Hougang Town Council, but where the town councils are so politicised, I can understand why.

With the PAP deciding to not disclose which are the companies they own, you don't know which are the ones the PAP owns and which they don't. If WP is not careful about who they award the town council management contract to, and if it gets awarded to a PAP-owned company, that company may potentially sabotage WP's town council operations in order to reduce WP's electability in the same constituency in the next General Election.

The PAP being the ruling party, and being the governing party for over 50 years, must first set fairness as a benchmark. Where that is not established, whether WP's action to award contract to FMSS was beyond reproach or not, becomes very subjective. And no, it's not a competition about who's more wrong, or where the greater conflict of interest lies. The fact is, WP does not own any companies - not one of the other political parties do.  But PAP does, and no one knows how many such companies they own.

WP, and all the other opposition parties try to serve the citizens of Singapore, in an uneven field created by the PAP;  but they compete with more integrity than the PAP.