"In this crane incident, I was initially concerned that the two workers (Mr Zhu Guilei and Mr Wu Xiaolin) were not properly paid. As it turned out, they did not have any salary arrears." ~ Acting Manpower Minister, Tan Chuan-Jin on his Facebook 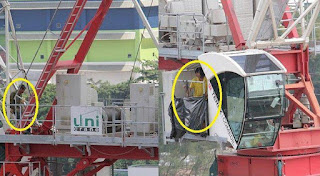 Does not that mean that if the workers had not gone on strike, the company they had worked for would have refused to pay them?

The Minister goes on to say that these workers, 'knew their around'. Why did he make that comment? Just because they made two trips to MOM, one which was 1½ years ago, they knew their way around?

On their second visit to MOM on 5th December, the attending MOM officers sent them away asking them to come back with documentary proof that they were not paid. But, how do you prove a negative? Should not have MOM  investigated the company at the point of the workers second visit to ascertain if the company has been paying its workers properly?

Now, let's get this straight. The workers were sitting on top of the crane for over 8 hours - from about 6.30am to about 3.00pm on 6 December 2012. That's more than 8 hours without relieving themselves, presumably without food or water.

So, according to these two workers, it was more 'troublesome' for them to go back to MOM to lodge their claims, than to sit precariously on a crane 10-storeys above the ground, without being able to relieve themselves, and without food or water. The workers must have felt utterly disheartened from their visit to MOM on 5th December 2012, to have come to that conclusion.

As a response to commenters to his Facebook note, the Manpower Minister said this, presumably in support of the civil servants in the Ministry of Manpower:


"...My colleagues are dedicated Singaporeans who serve as public servants. Like us all, no one is perfect. But I appreciate their efforts to look out for the well being of our workers, both foreign and local. They work closely with NGOs and I know that there are many follow ups that we do. Yet, they get criticised by those whose interest lie only with looking out for foreign workers.

Broad-brushing their efforts in a negative way would not be fair. [SNIP]

But I am grateful for their dedication and diligence and I thank them for helping to look after our workers."

I agree with the Minister that we should not fault civil servants. Our public servants are among the best in the world. From experience, I know that many of them are fair, and try very hard to work within the contains of the policy to help Singaporeans, and to make Singapore a better place.

If anyone should be faulted, then it must surely be the PAP Government; for their lack of political will to propose better policies and legislation.  Why, even the Manpower Minister readily admits that he's not sure if legislation is the solution to everything.

Without a framework of better policies and tighter legislation, you make the life of civil servants that much difficult for them to serve the general public. The Ministers forget that it is the civil servants who stand in the front-line to bear the brunt of dissatisfaction of bad policies and lack of legislation - which I suspect they themselves know in their hearts is indefensible, but yet they try bravely.

As a migrant workers volunteer rightly highlighted on my Facebook note on this topic, 'there are no laws that stipulate how employers should keep payment records of paying workers, so in these kind of cases there's often no documentation on either side.'

Why can't this Government legislate laws which will make it compulsory for employers to make use of Singapore's banking system to pay their employees? Yes, you cannot and don't have to legislate everything. But surely where there's a huge imbalance of power between corporations and workers, appropriate legislation should be enacted to protect the vulnerable.