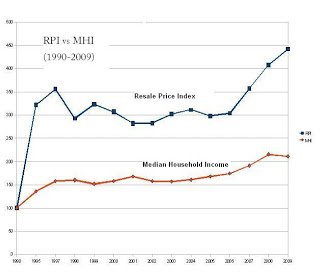 The focus is now on housing and on what can be done to moderate the price of public housing, and not only that but to make it affordable and available to singles.  The following are my suggestions as to how the relentless price escalation of HDB flats may be prevented:

Revert to Registration for Flat System
This system ensures that flats are built according to the number of applicants on its waiting list. HDB discarded this system in early 2000s because the former National Development Minister, Mah Bow Tan, was spooked when there were 31,000 unsold flats after the Asian Financial Crisis in the mid-90s. It was deemed that the RFS was an unreliable system, as it was unable to gauge if there was genuine demand, or if there was a commitment to buy. Now, the problem is not one of demand, but of supply. If we reverted to RFS, we may be better able to correct this problem and so stabilise the price of public housing.

Restrict Public Housing
As others have said, I support the idea of restricting public housing to citizens, because as pointed out by ST's Han Fook Kwang, 20 percent of HDB transactions are by permanent residents, and that is a big proportion which may affect the price of HDB flats. But I also understand that there will be some people who will not be able to become citizens for one genuine reason or another, and would have to remain permanent residents. I would also recommend that the HDB resale market be open to long-term permanent residents (LTPR), who have made Singapore their home for 10 years or more.

One-bite at Subsidised Housing
Citizens of Singapore and LTPR should be allowed to purchase subsidised flats directly from HDB (or Resale Flat under CPF Housing Scheme) only once.

Housing for Singles
Make 2-room flats that are currently priced at between $83,000 in non-mature estates, and $128,000 in mature estates (before subsidy) to singles who are 35 years of age or older.

Unsubsidised Rental Flats
The current market rental for 3-room HDB flat is an average of $2000 per month. Some citizens who are newly married, singles and other citizen households, may not be ready to purchase a HDB flat and be tied-down with a mortgage for 20 - 30 years. For such groups of people HDB should build 2 and 3-room rental flats which can be rented at unsubsidised rates (different from market rates), which should be pegged at a formula pegged at building such flats.

Retirement Income
Make reverse mortgage an option for HDB flat owners who are senior citizens, to tap into for their retirement income. With reverse mortgage, HDB flat owners will be able to borrow money against the value of their home. No repayment of the mortgage (principal or interest) is required until the borrower dies or the home is sold. Reverse Mortgage is typically structured in such a manner that the loan amount will not exceed the value of the home over the life of the loan. Because the HDB flat serves as collateral, it will be sold to repay the mortgage when the borrower dies. HDB should relinquish its Lease Buy Back Scheme, and the Monetary Authority of Singapore should come out with a regulatory framework for private banks to offer such reverse mortgages to HDB flat owners who are above 65 years of age.