"The maximum tenure of all new residential property loans will be capped at 35 years. In addition, loans exceeding 30 years tenure will face significantly tighter loan-to-value (LTV) limits. This will apply to both private properties and HDB flats. The new rules will take effect from 6 October 2012. ~ Monetary Authority of Singapore

This is a welcomed move by the Monetary Authority of Singapore helmed by Finance Minster Tharman Shanmugaratnam, to cool the property prices, especially the HDB prices, which seem to be spiraling upwards, out of control (link:  http://bit.ly/U3HRRL). 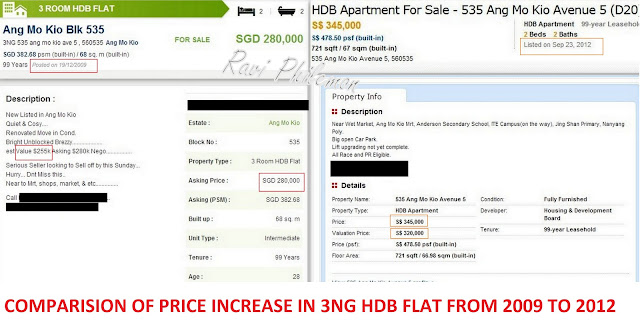 In three short years, from 2009 to 2012, prices of HDB flats have increased by at least a hundred thousand dollars across all flat types. Recognising this unsustainable upward trend in the prices of public housing, the Ministry for National Development (MND) has directed HDB to build more flats and in a few years, there will be more apartments in the market. MND hopes that this will stabilise the escalating prices. But in the meantime, it is important to prevent a price bubble and to instill more stability into the public housing market.

This move by MAS is expected to affect older buyers more than those that are younger. For example, someone who buys a property when he is 40 years old, will only be able to get a 25-year mortgage. The 40-year-old who wants to take more than a 30-year loan, or extend the loan past the age of 65, will have to fork out more cash. If it is the buyer's first mortgage, such loans can only be up to 60 per cent of the property's value, and if it is is the buyer's second, the buyer'd get a loan at no more than 40 per cent of the property's value. This would mean that the buyer would have to fork out 40 - 60 per cent in cash to purchase that property.

The PAP Government of Singapore has chosen enhancement of public housing as a social policy to support old age, instead of targeted social transfers.

Because this Government has substituted asset enhancement for an adequate social safety net, the premature bursting of the asset bubble will prove devastating for the PAP. This is the reason why this Government is intervening in the red-hot property market, only a few months after it last stepped in (without much success).

The PAP Government also seems to be backtracking from its Asset Enhancement Policy, and is now saying to HDB owners not to assume that they can always sell their flats at a higher price. The rising property prices may give a false confidence, it warns.