What can Mr Chiam do for us? 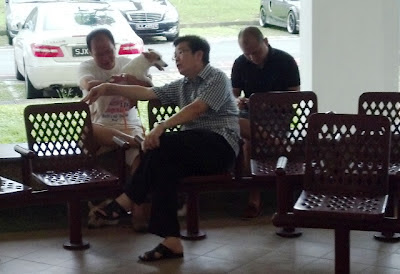 If it was up to me, I would have hesitated in releasing the media release that Singapore People's Party (SPP) did (see HERE). It seemed to a few that the political party was trying to gain mileage, out of some Bishan residents' selfish 'not in my backyard' (nimby) syndrome.

But I re-read the media release and realised that the Party actually "believes in a humane and just Singapore, where the disadvantaged such as the elderly will be looked after with dignity" and actually supports the building of a nursing home in Bishan.

What SPP did was, it empathised with those affected by the proposed building of the nursing home (not agree with them), and questioned how the residents were engaged.

The Party's response that 'alternative sites should be actively sought (and that the) location of the nursing home in this case is still negotiable', only echoed what the Ministry of Health had said earlier on that day that "the ministry will consider all the concerns and suggestions for alternative sites before making a decision on where the home will be located in Bishan” ('No to nursing home, say Bishan residents',The Straits Times dated 28 May 2012). The Straits Times article "View sought 'few months before construction'", dated 29 May 2012, which reported that “the ministry stopped short of saying it will consider new sites for such developments", seem to indicate that the Government had hardened its stance since the first report in the ST.

When I arrived there at about 10am, Mr and Mrs Chiam were already there with their Party members and volunteers; and a few residents had also gathered under the void deck, to engage with the Party.

The first person to speak when the Party tried to engage those that had gathered there was a gentleman who had brought his pet dogs with him; and he asked in a very loud voide, "So, what can Mr Chiam do for us?!" 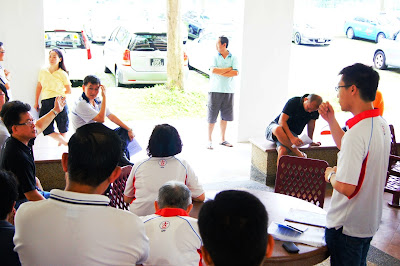 The party members seemed a little taken a back at first, by that seemingly confrontational question. When Mrs Chiam said that the Party can only decide what they can or cannot do after engaging with the residents, the gentleman again said in a very loud voice that the residents have all been consulted, the nursing home is coming to the neighbourhood and asked again what can SPP do for these aggrieved residents.

It was as if he was trying to provoke the Party to say that they'll do their best to ensure that the nursing home does not come to Bishan St 13.

The facilitator of SPP's engagement session quite cleverly chose not to respond to him, and said that since he has now spoken, he should let the others express themselves as well. There was a stark silence for a while before an older gentleman started to speak.

The older gentleman expressed how Bishan St 13 was a fairly built-up area with very little open, green spaces for children to play. He expressed how his own grandchildren now use the field to play, and said that he'd like that open space to remain, so that it could be a space for community bonding for the children, where they would develop affinity for the neighbourhood.

The resident who had first spoken up left midway through the older gentleman's feedback to the Party.  As soon as he left, there was quite a bit of loud chatter among the residents (more had gathered at the void deck by then).

An older woman then walked towards the Chiams, sat next to them and alleged that she was quiet earlier because the person who had given the first 'feedback', was a member of the Residents' Committee, that he was Wong Kan Seng's right-hand man for that area.

Others too were more spontaneous with their feedback after that. One resident said that she bought a unit on the second floor, facing the soccer field about 2 months ago, and paid top dollars for it (about $650,000), because it was facing an empty plot of land. She was unsure how her investment would be affected if the nursing home comes there. 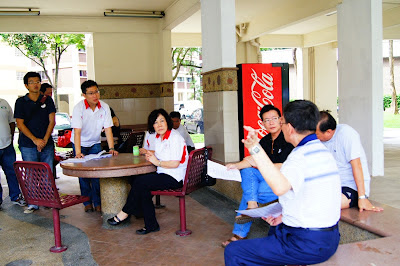 Of course others brought-up issues like air-flow, that the nursing home will become a dumping ground for the very old who may not have that many more years to live, and other seemingly more trivial reasons why the nursing home should not be there. But I know that you should never trivialise the problems of the people, even if they seem unreasonable.

I know first-hand how it is very important for facilities to be available at accessible locations for the more vulnerable in society. But it is also important for the residents to understand why the facility has to be there and for them to buy-in to the idea because for the residents, and for the beneficiaries of the programme, it will be a long-term relationship. Any public facility that does not have the support of the community that it is in, is bound to be doomed. It will be a very strenuous and unhealthy relationship for those in the community as well as for the beneficiaries of the programme.

I also know first-hand that the HDB is very concerned about the residents that live in the neighbourhood and  take their feedback seriously, not even hesitating to take a vote among the residents when it is necessary, to determine if the residents there are accepting of the facility.

I think they do this because after 50 years of building homes for Singaporeans, they understand why it is important for people to live in harmony.

One feedback from a resident who will not be directly affected by the nursing home was invaluable, in my opinion. He said that he lives in another block not affected by the proposed erection of the nursing home, but was concerned about the transparency in the process of how these sites are allocated. He was also concerned about the point from where the the MPs, the grassroots leaders and the government engage with the residents.

What's apparent to me (from Toh Yi, to Mountbatten, to Woodlands and now in Bishan St 13) is that there seem to be a de facto policy in place to build facilities for the aging population in the immediate neighbourhoods.

If there is such a de facto policy, I wonder why it has not yet been properly tabled in Parliament to be appropriately debated?

Such a debate would have properly explained to the citizens the importance and value of having such facilities in their neighbourhoods. And more importantly you avoid polarisation, and name-calling (nimby) between neighbours in the community.