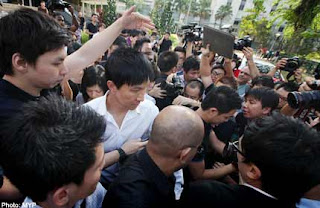 Jesus said, “Judge not, that you be not judged." Being a committed follower of Christ, this is one of my guiding principles in life, and I think it is an apt principle to remember in the case where five leaders of City Harvest Church have been charged in court on Wednesday for alleged misuse of church funds.

I think it is very human to want to judge people who have 'misused about $50 million' because we think of all the things $50 million could do, but at such moments, we must also not be quick to forget all the good the church has done while under the leadership of these five - one of it being the ministry to the hearing impaired, where they help the hearing impaired adapt better in the mainstream society.  That is only but one example of their service to the disabled. They have an outstanding track record in serving the disadvantaged in our community, from dysfunctional families to the terminally ill.

It's also quite admirable that many of the church members have rallied behind their church leaders who are now in trouble with the law. But in their earnestness to support the leaders of the church, the members must be careful not to cast aspersions on others unnecessarily.

Jesus also said, "Render unto Caesar the things which are Caesar's, and unto God the things that are God's".  The Commissioner of Charities (CoC) only investigated City Harvest Church because the church subjected itself to the Charities Act by registering itself as charity according to the law of the land. When you've willingly subjected yourself to a certain law, then you must expect  to be fully scrutinised by that law. You cannot after willing subjecting yourself to the law of the land, turn around and say that you "are a society and do not owe members of the public any account of our how (your) funds are used", that your donation to that Charity "does not need protecting by CoC." (LINK)

There is very little to take offence when the CoC commented publicly on the issue, because CoC was just doing its job by keeping Singaporeans informed about a charity that is registered according to the law of the land, which is of public interest. Calling the comments of Coc then 'defamatory' and accusing it of being in 'incendiary language' is, to say the least, irresponsible.

"Father, forgive them, for they know not what they do." Jesus said that when he was unfairly persecuted, and was on the crucifix. if the media reports that 200 supporters of the five church leaders who had gathered outside the Courts, pushed the media people and obstructed them aggressively were true (LINK), that was not a very Christ-like behaviour. When the church took issue with the media coverage, alleging that the media has 'pre-judged' the case (LINK), they seem to justify this type of mob behaviour by some of the church members.

I am personally very concerned about this issue because I see how this issue can quickly spiral out of control as one of religious persecution. IT IS NOT! It is a secular action taken against 5 individuals' alleged breach of trust. Let the law run its course.

Church leaders cannot go wrong by reiterating this over and over again to the members of their church.

Jeffrey said…
the defiant stance taken by the CHC helmsman is however indicating that the CHC look at this as persecution by the authority.
June 30, 2012 at 8:46 AM

Unknown said…
Incredibly, while Ravi believes we should not prejudge, here we have two person who does exactly that. "defiant stance"? "defence of the desperate"? You have judged them guilty, even before the court of law does it.
July 2, 2012 at 1:46 PM