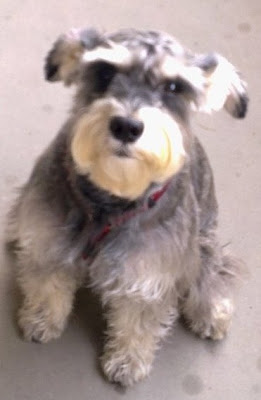 I still remember the day quite vividly. It was about a year after we had come back from the USA. We decided that we'll have a dog. Well, the children had a bit of convincing to do with the wife, but they had good persuasive skills that time.

When it was all settled that we're ready for a dog, we decided that we'll adopt one. We looked up SPCA's website and decided on a Jack Russell. But by the time I went to SPCA the next day, that dog had already been adopted by someone else. That was when I noticed Maximus (he was called 'Gimly' then).

I could immediately see that he was a shy, but lovable boy. I brought my family to meet him at SPCA the next day, and they all fell in love with him immediately (even if my wife was a little apprehensive at first).

When we completed all the formalities at SPCA and brought him home, he was very unsure. It took him a while for him to settle down and to display his temperament and character. Eventually he began taking us all for granted.

Now, he has become so much a part of our lives. More than the joy we bring him, he has brought a lot more happiness into our lives.

Thank you for all that you've given us Maximus Wolfe Philemon.